As winter break approached, Jasmine Torres’ roommate innocently asked her where she’d be spending the break.

Surprised, the then-freshman at the USC Dornsife College of Letters, Arts and Sciences replied, “What are you talking about? I’m staying here.” She didn’t realize the dorms closed over the winter recess.

More important, Torres had nowhere else to go.

Torres spent her teenage years within the Los Angeles County foster care system, the largest in the United States with roughly 36,000 youths. At 13, Torres was forced to leave her home, finding herself on the street with nowhere to go on Christmas Day.

She made her way to a homeless shelter in Hollywood and a case was opened for her with the Department of Children and Family Services.

“When you’re a kid, you never think you’re going to be homeless, that you’ll be living in foster care,” Torres said. “When I entered that living situation, I was really nervous.”

She spent four months at the shelter, which she described as unforgettable and eye-opening. She is sharing her story, she said, to illuminate the issues facing foster youth as a route toward awareness, action and progress.

“A lot of times it felt no different than jail,” she rcalled. “The food was locked up; you could eat only when they fed you. If you missed dinner time, you wouldn’t eat. If a youth missed a bus and got to the shelter late, they would find out the staff gave their bed away to someone else.

“I quickly realized living at a shelter, you weren’t guaranteed anything.”

Meanwhile, she was attending school at Foshay Learning Center, one of the USC Family of Schools, and participating in the USC Neighborhood Academic Initiative (NAI), a six-year pre-college program designed to prepare low-income neighborhood students for success in college. It was her participation in NAI that gave her the determination and encouragement to strive toward college.

Her commitment to NAI and attending USC buoyed her through the chaos of her living situation. Through the encouragement of friends and mentors, she stayed committed to her educational goals. Her good behavior moved her up the foster care hierarchy to a group home, where she awoke at 5 a.m. every day and commuted by bus to Foshay so she could continue participating in NAI.

“I stayed very committed to school, and I was very lucky to have had support from the schools I attended,” she said. “While in foster care I had only three different social workers, but I met some kids whose case got moved around so much that they had lived all across LA County, had six or seven different social workers or lived in more homes and attended more schools than they had fingers.

“I heard these stories all the time and it was very emotional,” she added. “It made me feel thankful for my own situation.”

It took courage to focus with the dysfunction she witnessed in the homes.

“At the group home, there was a lot of instability,” she said. “Every day was like a game — you’d go to school in the morning and come back to something different. One morning you may leave for school and then come back only to find out that your favorite staff person quit or was fired or that a resident you were really close with was kicked out for getting in a fight. You never got a chance to say goodbye. That kind of thing happened quite a bit.”

Torres, however, still recounts special moments she experienced while living in the group homes: eighth-grade graduation, high school dances and getting her USC acceptance letter in the mail.

Eventually she was promoted to a new group home for longer-term residents. She remained very involved in school. She participated in the honors program and Upward Bound, tutoring children who were living on Skid Row and focused on attending USC.

In two years at the group home, she saw one resident go on to college to California State University, Channel Islands. Three years later, she became the second. She was accepted into USC Dornsife and as a Norman Topping Scholar.

“At the shelter, there was very little encouragement about going to college, all they really gave you was shelter and food,” she recalled. “I was fortunate to have had educational mentors once I moved to the long-term group home and was in high school. But the reality is that I was treated as the exception, not the rule.

“Most of the youth were criminalized for engaging in things such as prostitution or for doing drugs,” she continued. “But I lived there and hearing the countless stories of pain, abuse and trauma, how could I blame them? Most of them didn’t have something like NAI that made them feel smart and college bound.

“NAI gave me a purpose — I didn’t decide out of nowhere that I wanted to go to USC. For many of the youth I met, they felt like they had no purpose. For others, their purpose was just misguided. Looking back, I wonder what my life may have been like without NAI, without feeling college bound or without the honors program at school.”

Now, Torres wants to help others at USC with similar backgrounds.

“There are certain experiences that foster youth go through that can be very different from their nonfoster youth peers,” Torres explained. “Even something as simple as not having somewhere to go for the winter — most students just go home and that’s very normal. But for foster youth, family and home may not be as easily defined.

“So I decided to try to make sure that students from the foster care system didn’t feel like they were alone or didn’t belong here at USC,” she said. “Every USC student should be embraced into the Trojan Family.”

Christina Yokoyama, director of the Norman Topping Student Aid Fund and mentor to Torres, has deep respect for her efforts to do good on campus and beyond.

“Since the day Jasmine first set foot on campus, she made it clear to us that she embraced the responsibility to ensure that others were given the same opportunities — or more — than she had. She is determined to pave the way for others and support them in the process.”

Most recently, her determination has led her to collaborate with Vice Dean for Diversity and Strategic Initiatives George Sanchez in establishing USC’s Trojan Guardian Scholars program (TGS), which is committed to supporting ambitious, college-bound students exiting the foster care system.

“The program’s goal is to serve as the safety net that these students need in order to succeed at USC,” Sanchez noted. “Students have so many pressures in college, housing, health care and the basic needs of life should not be one of them.”

Sanchez, a TGS mentor and academic adviser, said it is difficult to know how many current or former foster students there are at USC, but it is estimated to be around 40 undergraduates. Students are not required to share that information, so robust promotional efforts are critical. Sanchez and Torres encourage students with similar backgrounds to join TGS, which will launch a website soon.

Earning her bachelor’s in sociology in 2014, Torres, plans to earn a PhD in sociology and one day become a professor. She benefits greatly as a Mellon Mays Undergraduate Fellow. This past summer Mays funded Torres’ research training at the University of Chicago. 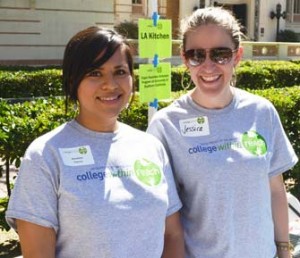 She is in the process of registering TGS as an official student organization. Torres and American studies and ethnicity PhD student Jessica Lovaas are focused on recruitment, which means going to high schools and organizations that interact with foster youth, telling them about the program and encouraging them to apply to USC. TGS officially launched in August and has already begun assisting students.

“We have to be welcoming to former foster youth students and let them know we will assist them and their unique needs, and this is one way to do that,” Torres said.

For Torres, her winter break with nowhere to go four years could have been a dangerous situation. She reached out to her former group home, but its officials said she could not stay there. She then asked for help from the Norman Topping program and Yokoyama arranged for her to move into the Parkside Apartments that were open during the winter break.

But not everyone in Torres’ position has a strong network or knows how to be resourceful. Torres is working to ensure these students don’t slip through the cracks.

The USC School of Social Work and United Friends of the Children hosted more than 500 Los Angeles foster youth for an event designed to encourage them to go to college.

The interaction uncovered a previously unknown link between father and daughter, a junior at the USC Price School of Public Policy.

USC Dornsife senior fosters the care of others