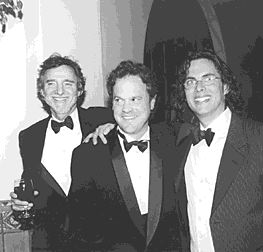 The writers of “Wonder Boys,” the story of a wild literary weekend that turns a university upside down, received USC’s 13th annual Scripter Award at a dinner March 5. The award, sponsored by the Friends of the USC Libraries, honors the year’s best film adaptation of a book.

A capacity audience of industry and literary figures attended the event, a benefit for the ongoing restoration and seismic upgrade of USC’s landmark Edward L. Doheny Jr. Memorial Library.

Michael Chabon, whose novel “Wonder Boys” was adapted for the screen by Steve Kloves, was modest when he received his crystal book Scripter Award. “I feel like the Olympic medal for diving was given to the guy who installed the diving board,” said Chabon. And co-winner screenwriter Steve Kloves joked, “I am ambivalent about awards because I have never won one.”

USC Dean of Libraries Jerry D. Campbell said the event honored” those individuals who give libraries their raison d’être. Without writers … there would be no need for libraries nor for the breakthrough technology designed to link people with information.”

Campbell said an example of such technology was part of the evening: “Scripter is now the first-ever film award ceremony to be Webcast live via the Internet. Around the world at this very moment, film aficionados, book lovers and others who have access to a computer and a modem are viewing this evening’s festivities.”

Opened in 1932, Doheny Library is one of the university’s oldest buildings and a Los Angeles historical landmark. In January 2000 the Doheny, the traditional home of the Scripter Award, closed its doors for a seismic retrofit. This year’s event was held in USC’s historic Hoose Library. The Doheny Library is scheduled to reopen in May.