When it comes to the arts’ role in fueling economic development, New York City might be its own worst enemy, according to Elizabeth Currid-Halkett, associate professor at the USC Price School of Public Policy.

As a panelist at a recent keynote event — “What is the Current State of New York’s Creative Economy?” — Currid-Halkett described a troubling paradox: Artists build New York City’s cache, which ends up making the city too expensive for them to afford.

“If Manhattan is becoming so gilded, what happens to the artists and creative people that are essentially the backbone of its reputation and huge parts of the economy, because they can’t afford to live there anymore?” she asked.

William Kelly, interim chancellor of the City University of New York (CUNY), moderated the panel, which also featured Kate Levin, commissioner of the New York City Department of Cultural Affairs, and Jonathan Bowles, executive director of the Manhattan-based Center for an Urban Future.

The event was part of the yearlong initiative, “Cultural Capital: The Promise and Price of New York’s Creative Economy,” produced by CUNY’s Graduate Center Public Programs and Advanced Research Collaborative in partnership with New York magazine.

As a sociologist, urban planning scholar and arts expert, Currid-Halkett has spilled plenty of ink on these topics in her books The Warhol Economy: How Fashion, Art and Music Drive New York City and Starstruck: The Business of Celebrity, as well as in articles for The New York Times, The Wall Street Journal, The Economist and Harvard Business Review. 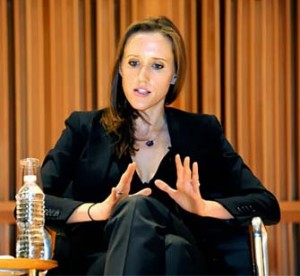 During the event, Currid-Halkett described the gentrification that artists have brought to neighborhoods like SoHo, Williamsburg and Chelsea.

Before long, the neighborhoods become so desirable that they price out the artists — with the exception of app developers, video game designers and a few highly commercial creative entrepreneurs.

“You still think of New York as a super-creative place, but we’re talking about major galleries in Chelsea where they’re selling $30 million paintings,” Currid-Halkett said. “That’s really different from the 1970s New York of Keith Haring and Jean-Michel Basquiat, when the whole city was alive with these young, artistic, bohemian people.”

This 21st century, gilded Manhattan is a problem because artists need communities — and specifically urban density — to advance their careers. It’s not just about a nostalgic notion of the New York of yesteryear; it’s about accessing galleries and spaces, keeping current by attending art shows and performances, and connecting with potential collaborators.

“Basically, we need to figure out a place, even if it isn’t on Manhattan, where these artistic people can thrive,” Currid-Halkett said.

It doesn’t matter whether it’s in Brooklyn or Queens, she noted, but “we have to do it somewhere or 15 years from now, we will really be at a loss with regards to our artistic community.”

This conversation holds particular weight as New York readies itself to choose a new mayor.

“There is this real expectation and lack of knowing of what’s next,” Currid-Halkett said. “As Bloomberg steps down from the helm, it’s the end of an era.”

A Focus on Urban Education

USC Rossier School of Education faculty combine research and practice in various ways, all directed toward improving the state of the art.

The Tomás Rivera Policy Institute, the nation’s premier Latino think tank, will join the USC School of Policy, Planning, and Development this fall.