Silverman, a 20-year-old junior from West Chester, Pa., is on USC’s Progressive Degree track, which allows driven students to begin work on a master’s degree while earning their bachelor’s. After four or perhaps five years at USC, Silverman plans to graduate with both bachelor’s and master’s degrees in astronautical engineering. 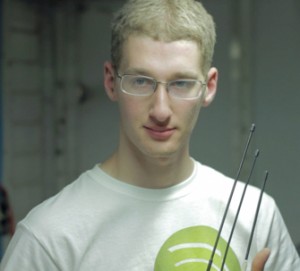 “I feel truly honored to receive this award, and I promise that I’ve only begun my contribution to space engineering,” Silverman said.

The Astronaut Scholarship is the largest merit-based monetary award in the United States given to science, technology, engineering or math (STEM) students.

Established in 1984 as the Mercury Seven Foundation, ASF awards 28 scholarships annually, each worth $10,000, for the best and brightest students pursuing STEM degrees. To date, the foundation has awarded nearly $3.5 million in scholarships to deserving students nationwide.

Cunningham, a Lunar Module pilot on the first manned Apollo mission in 1968, presented the award at a ceremony in the Taper Hall of Humanities.

Silverman said that USC’s Department of Astronautical Engineering was a big part of what attracted him to the university.

In addition, he chose USC because of its proximity to and relationship with the space industry — in particular, the burgeoning private space industry. He has worked on a NASA-funded project and has interned at SpaceX, where he worked on thermal control and life support systems for the Dragon spacecraft.

“It’s pretty rare to run into a student that is not only pretty much perfect in all of his classes, but has real hands-on skill,” said Dan Erwin, professor of astronautical engineering at USC Viterbi, who has taught Silverman in class and worked with him on the USC Rocket Propulsion Laboratory. 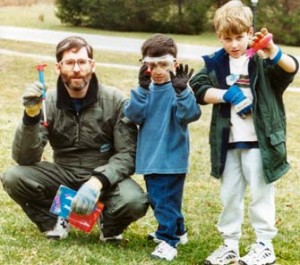 Silverman, right, at age 5, doing model rocketry with his father and brother (Photo/courtesy of Sharon Silverman)

Silverman has had a passion for engineering throughout his life. That passion found its direction, ironically, due to the media attention surrounding the shelving of the Constellation human spaceflight program by the federal government in 2010.

“I realized how important space exploration could be for humanity and decided to pursue astronautics,” said Silverman, who ultimately hopes to contribute to the advancement of space exploration and possibly to travel to space.

He joined the Rocket Propulsion Lab shortly after starting school and received his Level 3 rocketry certification from the Tripoli Rocketry Association in 2012.

The lab is comprised of students, mostly undergraduates, who build and fly rockets. The students launched a rocket in the Nevada Desert last month.

“Jason started drawing and designing rockets as soon as he could hold a crayon,” said Sharon Silverman, Jason’s mother. “Being able to combine classroom theory with workbench skills alongside other motivated people has been a rich experience that Jason could not have gotten anywhere else.”

When Jill McNitt-Gray studies takeoffs and landings, she’s not tracking 747s and B-52s. She’s watching human projectiles twisting and somersaulting through the air.