Working in Sarah Bottjer’s laboratory, USC Dornsife College of Letters, Arts and Sciences doctoral student Amy Garrison researches the interhemispheric connections between vocal-control regions and the amygdala in the brains of songbirds.

As with humans, songbirds are vocal learners; they must hear the sounds of adults in order to eventually produce their own mature versions. In the brains of young birds, a feedback pathway exists through which a bird’s current song is compared with the memory of its parent’s song. This pathway also integrates social and motivational factors.

Garrison described her research during a recent Southern California conference held on the University Park Campus. Focusing on the study of hearing and vocal communication, the conference was organized by Bottjer, professor of neurobiology at USC Dornsife, and the University of California, Irvine.

“This conference represented a tremendous opportunity to bring together researchers of diverse backgrounds who all investigate hearing and vocal communication,” Bottjer said. “Participants learned from one other in a very interdisciplinary way.”

At the conference, Garrison elaborated on her songbird research, describing a cortical region of the avian brain that receives vocal input and feeds back into the pathway. She said her results indicated that this region not only creates feedback circuits between both sides of the brain, but it does so through the amygdala, the processor of memory, emotions and social interactions in humans.

Thus, she said, the amygdala may contribute to vocal learning in songbirds by providing information about social settings and emotional state. For example, the social interaction between a parent and its young might enhance the offspring’s ability to learn its parent’s specific vocal pattern.

Other presentation topics ranged from studying the impact of music practice on neurodevelopment in children to the function of bipolar neurons in the inner ear, technological advances related to cochlear implants and the role of genetics during inner ear development. 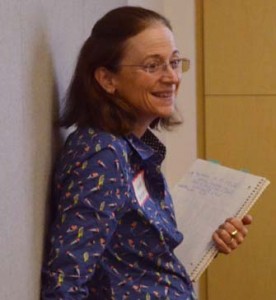 “This type of semiformal conference is a great way to cross-fertilize between different areas of research ranging from molecular genetics of hearing loss to cognitive aspects of auditory experience during development,” Bottjer said. “The ability to participate in a small conference also enriches the experience of graduate students and postdoctoral scholars in USC’s NIH-funded training program in hearing and communication neuroscience, since they present results from their own research and hear about the work of other scientists.”

Another USC presenter was Robert Shannon, professor of research and otolaryngology at the Keck School of Medicine of USC, who presented data on auditory brainstem implants in children. His research outlines how cochlear implants are not always best suited for restoring functional hearing, since they have no impact on patients who have lost their auditory nerve due to genetic or congenital defects, tumor growth and subsequent surgical removal or temporal bone fracture.

Li Tao, a postdoctoral scientist at the Keck School, also presented his work on epigenetic regulation of genes during the development of the inner ear in mammals. Tao works in the laboratory of Neil Segil, research associate professor in the Division of Cell Biology and Genetics.

Garrison said the conference helped her to advance her research.

“The best insights and questions often come from someone who’s slightly outside of the field,” Garrison said. “I got a couple of great ideas for my birdsong project from people who study children with cochlear implants. An interdisciplinary conference like this helps us find fresh perspectives on our data.”

A long-standing love affair between words and the visual arts at USC Fisher Museum heated up when poet David St. John read six new love poems at a special event.

Unchained Scholars brings together social work students who were system- or justice-impacted, along with their allies, to organize events and offer one another support.

Smoke exposure can alter how the liver processes fats, according to lab research, ultimately contributing to nonalcoholic fatty liver disease.