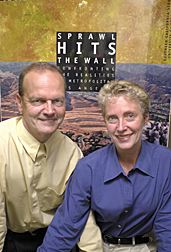 Professor Michael Dear, lead coordinator of the SC2 report, “Sprawl Hits the Wall,” and Jennifer Wolch, the professor of geography, urban planning and development who led the 22-member research team.

A social, economic and infrastructure crisis threatens the Southland, and neither the limited growth policies of the 1970s nor the 1950s suburban model of outward growth will solve the problem, according to a two-year study conducted by USC’s Southern California Studies Center (SC2) and the Brookings Center on Urban and Metropolitan Policy with funding from the James Irvine Foundation.

Sprawl in the Los Angeles region has reached its limits, said Michael Dear, lead coordinator of the document. The 54-page report – “Sprawl Hits the Wall: Confronting the Realities of Metropolitan Los Angeles” – shows how the Los Angeles region grew into what it is today, and what regional leaders must do now to maintain the quality of life in Southern California, Dear said. “It is a wake-up call – not only for Southern California – but for the rest of urban America.”

The report was released at a March 7 press conference held at the Davidson Conference Center. Dear said he hopes the study will spark renewed interest in rethinking land use.

Los Angeles, the nation’s second-largest urban region, has 16.7 million residents in 177 cities spread over 14,000 square miles. There isn’t enough developable land to adequately accommodate the 6 million new residents who are expected to arrive in Southern California in the next 20 years, the report said.

The inevitable population growth – the majority of which will be through natural increase, not immigration – creates a pressure to grow at a time when there is little room for outward expansion, diminishing resources to support this growth and a governance structure that is ill-equipped to address the problem, the report said. Most remaining land is government owned, protected by land and species conservation measures or physically unsuitable for development.

Shortages of affordable housing, jobs and quality education – along with a failed governance structure that often pits the region’s 177 cities against one another – are also part of the problem.

“The region’s poverty rate rose from 13.1 percent in 1990 to 16.5 percent in 1998,” said Jennifer Wolch, a professor of geography, urban planning and development who led the 22-member research team. “As in most American metropolitan areas, the divide between the ‘haves’ and ‘have-nots’ in metropolitan Los Angeles is widening.”

The report singled out four approaches to meet the challenges facing Southern California:

• Grow smarter – Make conscious choices about water, land and transportation so that future urban growth patterns reinforce existing communities instead of undoing them.

• Grow together – The growing economic and spatial gap between rich and poor threatens the prosperity and peace of the region. Regions that grow together grow faster economically and grow more efficiently and more equitably.

• Grow greener – Metropolitan Los Angeles will not prosper unless it comes to terms with its natural setting. Growing greener and cleaner involves managing sprawl in ways that are consistent with environmental needs.

• Grow civic-minded – Civic leaders throughout the region must become more civic-minded. To grow smarter, together and greener, a new regional civic and governance structure is needed.

The report concluded that whatever the direction chosen, “No solutions will emerge unless a broad-based regional dialogue [based] on concrete proposals is now be gun, one that recognizes the realities of metropolitan Los Angeles, but also contains the potential to build new coalitions capable of reaching consensus on solutions, and then successfully carrying them out.”

“Sprawl Hits the Wall,” a joint report from USC’s Southern California Studies Center and the Brookings Center on Urban and Metropolitan Policy, is available online at http://sc2.usc.edu.