Stephen Smith, executive director of the USC Shoah Foundation – The Institute for Visual History and Education and adjunct professor of religion, has been appointed the inaugural holder of the UNESCO Chair on Genocide Education.

USC worked with the United Nations Educational, Scientific and Cultural Organization (UNESCO) to establish the chair, which will promote an integrated system of research, training, information and documentation on genocide education. The position will help facilitate collaboration between high-level internationally recognized researchers and educators.

“Through his support of innovative technologies and academic initiatives at the USC Shoah Foundation, as well as his dedicated work in Rwanda with students aimed at overcoming prejudice and intolerance, Stephen Smith has emerged as one of the world’s leading educators in the area of human rights advocacy,” said Elizabeth Garrett, USC provost and senior vice president for academic affairs.

“As the inaugural holder of the UNESCO Chair on Genocide Education, he will continue to promote UNESCO’s long-standing mission of sustaining peace across nations and cultures.”

Working closely with UNESCO, Smith will conduct research that contributes to genocide education and human rights activities at national and international levels. In addition, he will develop educator training and support programs that foster a multidisciplinary approach to the pressing ethnical questions mass violence engenders.

“I am a firm believer that education is the bedrock of our efforts to prevent genocide,” Smith said. “Through this partnership, USC and UNESCO are joining forces to develop the research networks and education programs essential to understand and limit genocide in future generations.”

While continuing to expand the USC Shoah Foundation’s Visual History Archive ­— which contains nearly 52,000 testimonies of survivors and witnesses to the Holocaust and the 1994 Rwandan Tutsi genocide — Smith will contribute to teaching and publishing shared scholarship. He will organize international conferences to promote cultural diversity, international dialogue and knowledge-sharing.

The creation of the chair at the USC Shoah Foundation contributes to UNESCO’s core mission to promote peace and human rights and to provide new visibility to the field of Holocaust and genocide studies, UNESCO Director General Irina Bokova said.

“We anticipate that this new chair, placed under the leadership of Dr. Stephen Smith, will contribute to increased international cooperation on these matters by connecting with UNESCO’s network of university chairs and by supporting the activities of the organization on issues pertaining to the history of the Holocaust, genocide and to human rights,” she said.

Smith, a recognized leader in the field of genocide education, is focused on finding strategies to optimize the effectiveness of the Visual History Archive for education, research and advocacy purposes. In 2012, he oversaw the launch of the USC Shoah Foundation IWitness program, an online resource providing secondary school teachers and their students throughout the world with more than 1,000 video testimonies of survivors and other eyewitnesses of the Holocaust to be used in classroom lessons.

Prior to his arrival at the USC Dornsife College of Letters, Arts and Sciences in 2009, Smith served as founding director of The Holocaust Centre, Britain’s first dedicated Holocaust memorial and education center. He also cofounded the Aegis Trust, which helped establish the Kigali Genocide Memorial Centre in Rwanda in 2004. Under Smith’s leadership at USC, Rwandan genocide witness testimony is being integrated into the USC Shoah Foundation’s Visual History Archive. The testimony is utilized in research and education programs. 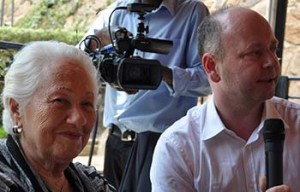 In 2011, Smith brought over officials from the Kigali center’s archive and education departments to USC for training. As a result of that professional development, the Rwanda center has built new archival systems and education programs based on the institute’s work.

USC Dornsife Dean Steve A. Kay noted that under Smith’s direction, the USC Shoah Foundation has continued to distinguish itself as an international center for comparative genocide research and education.

“I can think of no one more deserving of this honor than Stephen, whose qualifications are exceptional, in fact unique, for this position,” Kay said. “At USC Dornsife, he has extended our genocide education to include Rwanda, Armenia and Darfur, and has led the USC Shoah Foundation IWitness program, a world-leading educational platform.”

In addition to the Holocaust and Rwandan testimony collections in the Visual History Archive, the institute has previously announced agreements with the Armenian Film Foundation and 24 Hours for Darfur, a grassroots video/education campaign, to bring their critical testimony collections to USC.

Smith is a founding member of the International Holocaust Remembrance Alliance, an intergovernmental body of 31 nations that determines policy on post-Holocaust matters around education remembrance and research. He has held several committee chair positions, including chair of Holocaust Memorial Day in the United Kingdom.

At USC, Smith’s development of the IWitness program aligns with the USC Shoah Foundation’s focus to make educational use of its Visual History Archive. Housed in USC Dornsife, the archive represents 57 countries in 33 languages and is one of the largest of its kind in the world. Since its launch, IWitness has received a seal of alignment from the International Society for Technology in Education, and in 2012 it was the American Association of School Librarians’ top website for teaching and learning. The resource has now been adopted in all 50 states and more than 40 countries.

Smith has also been a crucial member of collaborations among USC faculty. He was joint awardee of USC Dornsife’s 2020 research funding support with Wolf Gruner, holder of the Shapell-Guerin Chair in Jewish studies and professor of history. Over the past three years, the two have examined the theme of resisting the path to genocide, bringing scholars from around the world to USC to examine this comparative genocide research area.

In 2012, Smith also convened the world’s first conference on sexual violence and the Holocaust, examining how gender violence has been used as a method of genocide. He is now spearheading the development of the USC Shoah Foundation Center for Advanced Genocide Studies.

His recent publications examine various aspects of post genocide. Some include the chapter “Massacre at Murambi: the Rank and File Killers of Genocide” in Why We Kill: Understanding Violence Across Cultures and Disciplines and the chapter “The Unique and Universal Aspects of Modern Genocide” in The Challenge of Teaching Controversial Issues in the Classroom (Continuum, 2012).

Smith earned his Bachelor of Divinity from the University of London. He studied at the Oxford Centre for Hebrew and Jewish Studies before earning his PhD from the Department of Theology and Philosophy at the University of Birmingham.

More than 120 USC students, faculty and staff attended a USC Gould School of Law discussion titled “Fighting Genocide Around the Globe: What Is Our Responsibility?”

How to eliminate anti-queer bias in text prediction