Resplendent in ivory wedding gowns and bearing blood-red banners with white lettering proclaiming “Stop all military operations in Syria,” “One hundred percent Syrian” and “Syria is for all of us,” four young Syrian women marched through the historical Medhat Pasha Souq in Damascus in an act of creative resistance.

For staging this November 2012 protest, these “Brides of Peace” were immediately detained by Syrian security forces.

“It is important to remember the role Syrian women have played in the uprisings in Syria,” said Sarah Gualtieri, associate professor of history and American studies and ethnicity at the USC Dornsife College of Letters, Arts and Sciences. “Women no longer get the media attention they did when the protests were beginning because now the face of the opposition has become increasingly masculine and militarized.”

During a recent panel discussion, Gualtieri, director of the USC Dornsife Middle East Studies Program, emphasized how the Syrian conflict had evolved from a grassroots uprising — sparked by response to teenagers arrested after spraying graffiti demanding freedom and the fall of the regime — to a full-blown civil war. Tens of thousands have died so far in Syria, and there is no clear end in sight, panelists said.

Titled “The Arab Uprisings: Crisis and Conflict in Egypt, Syria and Beyond,” the event took place in mid-September at Doheny Memorial Library. Speaking to a packed audience of students and faculty, USC Dornsife experts on the region discussed the ongoing strife in the Middle East and whether the United States should take action. 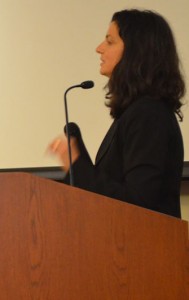 Special focus was put on Syria, Egypt and Libya. Panelists addressed the causes of the conflict, potential resolutions, diplomatic relations and the impact on regional politics, placing issues in a broader political and cultural context. The event was moderated by Wayne Sandholtz, holder of the John A. McCone Chair in International Relations and professor of international relations and law.

Sandholtz introduced the panelists and explained the importance of the discussion.

“We have all read the stories and seen the images from the Middle East of massive public demonstrations, violent government responses, armed groups, civil war, the use of chemical weapons and the removal of an elected government,” he said. “This is the right moment to place recent events in their political and cultural contexts, and to think about what — if anything — the United States can or should do.”

Laurie Brand, Robert Granford Wright Professor and professor of international relations, outlined the causes of the recent events, brought on in part by significant economic stagnation in the region and a scarcity of jobs. This is compounded by the so-called “youth bulge” in which large numbers of young people are arriving in the job market with little to no education and qualifications.

Political and economic corruption in tandem with authoritarian brutality and repression, combined with bureaucratic and developmental inefficiencies all played a role, Brand said. Other causes have included a declining quality and number of governmental services, and in the case of Syria, the disastrous effects of drought.

Another issue, according to Brand, is the rise of sectarianism.

“The Syrian civil war did not begin as a sectarian war, but as it has unfolded and additional parties have become involved, it has taken on increasing sectarian dimensions,” she said. “In Egypt, the transitional government has been using hypernationalism to try to mobilize the Egyptian people against a terrorist threat. This strategy serves to distract the population from their government’s oppression of the Muslim Brotherhood. It does so by clothing the rulers’ persecution of this organization in an anti-terrorism — or security — narrative.”

Brand also noted the shifting alliances in the region and the clear confluence of interest between Saudi Arabia and Israel. Both countries are concerned about Iran’s regional role, particularly its ability to develop greater nuclear capability, she said.

Some attribute the swift expansion of uprisings across the region to the role played by the media, including social media, she noted.

“But there has been less comment on the regional impact of the deterioration in one authoritarian system and what that means for the gradual authoritarian breakdown in other parts of the region,” she said.

Sherman Jackson, holder of the King Faisal Chair in Islamic Thought and Culture and professor of religion and American studies and ethnicity, spoke about how events in the region have impacted the discourse on Islam and its relation to politics and government. He focused on Egypt because the recent ousting of Mohamed Morsi, the country’s first democratically elected president, had deeply divided the global Islamic community.

“In America we have been given to think that it is simply an issue of Islamists on one side and secularists and liberals on the other,” Jackson said. “This is patently not the case.”

Even those at the forefront of Islamic law are grappling to understand how Islam relates to the current situation, he said. 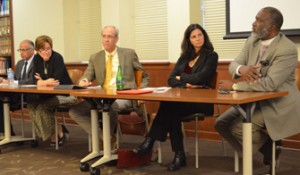 “It is going to be very interesting to see where the development of new strains of political thought about the relationship between politics and Islam will take us in the future,” he added.

Fayez Hammad, a political science lecturer at USC Dornsife, discussed the role of militant groups as a way to compare the Libyan transition and the Syrian crisis.

The challenges now facing Libya as it struggles to overcome the legacy of colonialism and 40 years of authoritarian rule under Col. Muammar Gaddafi illustrate the difficulties of political and societal change.

“It’s one thing to cause the downfall of an authoritarian regime, it’s entirely another to lead a country into a transition toward democracy,” Hammad said.

Gualtieri commented on the U.S. administration’s emphasis on morality and dignity in reference to whether it should intervene in Syria.

President Barack Obama described the Aug. 21 chemical attack on Syrian civilians as “an assault on human dignity.” While Obama has attributed the deadly attack to Syrian President Bashar al-Assad’s regime, the panelists urged caution in apportioning responsibility until all investigations were completed.

Gualtieri noted that the call for “dignity” is heard as frequently from participants in the Arab uprisings as their oft-repeated battle cry “Bread, Freedom and Social Justice.”

“However, it’s difficult for inhabitants of the region to take seriously this defense of dignity by the American administration when there has been so much inconsistency,” Gualtieri said, noting a lack of U.S. reaction to previous, well-documented examples of chemical weapons use by other countries in the region.

“So, yes, we need a language of dignity and morality, but the U.S. loses credibility when it seems to send a message that some lives in the region are more valuable than others,” she said.

“To imagine a comprehensive solution to the instability is to imagine one which must be based on the recognition that human dignity extends to all inhabitants of the region and not just to some.”

Lecturer looks to Syria and asks: Where are the women?

Updates on the Syrian uprising have been in the news for almost two years, yet many of the nuances of the conflict have often been overlooked by the average newsreader.