USC scientist Qi-Long Ying and a team of researchers have long been searching for biotech’s version of the fountain of youth — ways to encourage embryonic stem cells (ESCs) and epiblast stem cells (EpiSCs) to endlessly self-renew, or divide to produce more stem cells.

In a pair of studies published in Nature Communications in September and in The EMBO Journal in August, Ying and his team revealed some of the ways that ESCs and EpiSCs retain their pluripotency, or ability to differentiate into virtually any kind of cell.

The study in Nature Communications identified a novel way of culturing human ESCs by focusing on the Wnt/beta-catenin signaling pathway — a group of molecules that work together to control various cell functions, including some related to embryonic development.

According to the researchers, this pathway can prompt mouse EpiSCs and human ESCs to either self-renew or differentiate. When the protein beta-catenin remains within the cell cytoplasm but outside of the nucleus, the stem cell continues to self-renew. When beta-catenin moves into a stem cell’s nucleus, differentiation begins.

The paper published in The EMBO Journal addresses mouse ESCs, which are derived from the embryo at an earlier stage and are more pluripotent than mouse EpiSCs.

The study revealed the important role of Tfcp2l1 — a transcription factor, or protein that controls which genes are turned on and off in a cell. 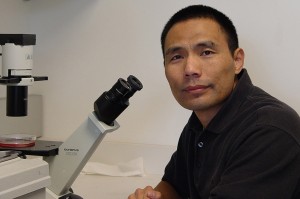 In mice, Tfcp2l1 helps communicate to ESCs that they should self-renew. The transcription factor also shows promise for “rewinding” slightly more differentiated EpiSCs into the more naïve ESC state.

By learning more about the ESC and EpiSC playbooks, Ying and his colleagues can better control stem cell self-renewal, offering hope for patients with currently untreatable diseases and creating potential for a wide variety of other applications.

“These new findings have allowed us to develop conditions for the efficient propagation of human ESCs, and might also enable us to establish pluripotent stem cells from different species,” said Ying, associate professor of stem cell biology and regenerative medicine at the Eli and Edythe Broad Center for Regenerative Medicine and Stem Cell Research at USC. “This has far-reaching implications for a variety of applied areas of investigation, ranging from manipulating the genomes of agricultural animals to developing stem cell-based therapies for ailments such as Parkinson’s disease or spinal cord injuries.”

Co-authors on the Nature Communications study included Hoon Kim, Jun Wu, Shoudong Ye, Chih-I Tai, Xingliang Zhou, Hexin Yan, Ping Li and Martin Pera from the Broad Center. Pera is also affiliated with the University of Melbourne, and Ye with Fudan University in Shanghai. Ye and Li also co-authored The EMBO Journal study along with Chang Tong, who is also from the Broad Center.