A chocolatier, a clothing designer and a photographer — all three are USC students who are taking their entrepreneurial dreams to the next level while learning new skills to run their businesses.

“I believe there is a lot of room for innovation in dessert,” said Shana Elson, a second-year MBA student at the USC Marshall School of Business who enjoyed her weekend work as a pastry chef so much that she quit practicing law and returned to school to learn how to launch her custom-chocolate venture.

Junior Raymond Courtney discovered he would rather research fashion design than study neuroscience. He’s now majoring in fine arts at the USC Roski School of Fine Arts and is pursuing a minor in entrepreneurial studies to develop his growing clothing company.

“It came to a point where I thought, I am at USC, and I need to take advantage of what’s offered,” he said. “Neuroscience is not my passion anymore, and I need to do what I really, really like to do.” 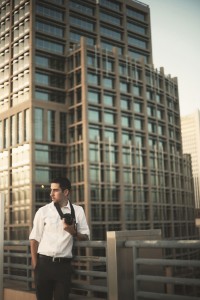 Self-taught photographer Ricardo Gálvez, a sophomore whose photos have been published in Vogue Italia, plans to pursue a degree in public relations to learn how to best promote his photography business.

“I want to send a message, tell stories, catch people’s attention, because in the photography industry today — in fact in every industry — artists need to be coming up with new ideas or else you start to blend in,” Gálvez said.

These Trojans are just a few of the growing number of entrepreneurial students who study at USC, many of whom also hone their skills at the Lloyd Greif Center for Entrepreneurial Studies at USC Marshall. Currently 1,400 undergraduate and 900 graduate students take courses in entrepreneurial studies each academic year, according to Helena Yli-Renko, director of the center and holder of the Orfalea Director’s Chair in Entrepreneurship.

“We are seeing the numbers grow as more and more students are interested in entrepreneurship,” she said. “We are looking to offer more interdisciplinary minors so anyone can take courses. The Greif Center is a resource. So even if students aren’t taking courses, they can come and talk to professors.”

Elson credited the center for helping her with everything from consumer research to company valuation.

She got the idea for her business when she got bored with her current chocolate options.

“I can make my own chocolate and put whatever toppings on I want, and I thought —what if other people could do that also?” she said. “It all came together in my head, and I decided there really is a market for this.”

It was a business transaction in her law office that ultimately convinced Elson to change directions and pursue her passion.

“I was working on a transaction to sell Mrs. Beasley’s Bakery, and I wished I was buying it. So one day I just decided to go to business school and reinvent my life around desserts,” she said.

“What I want is to get my first retail store up and running, and figure out what needs to be tweaked before I launch another store,” she said.

For Courtney, life revolved around his love for fashion. He first dabbled in design as a teenager when he air-dyed shirts, which attracted the attention of friends who wanted some too.

“Back then I didn’t think that it would be a viable business, so I would just make clothes for others because I just loved it so much,” he said.

When his brother Martel went to Los Angeles Trade Technical College to study fashion design, the two developed their own clothing brand called Macnificent, which they initially sold on the streets and door to door.

Once they sold their first collection to a store, Courtney decided to explore entrepreneurial studies at USC. Through the program, he has learned about production, cost management, marketing and sales.

“If not for the program, I don’t believe I would be on the level I am now — just in how to conduct myself, make cold calls and approach people,” Courtney said.

The brothers’ goal is to open their own store to sell their “exclusive, trendy and unique street wear/urban apparel,” which currently can be found in seven locations throughout Los Angeles.

Gálvez is also interested in fashion, but his entrepreneurial pursuit took him in a different direction — conceptual fashion photography.

He started out taking family pictures with “a simple little digital camera.” His interest in photography led to a lot of experimentation and research of successful photographers.

His success doing freelance photography for three Arizona magazines led him to search for more outlets, which included submitting photos to Vogue Italia, three of which were published.

Gálvez came to USC to learn valuable marketing and networking skills, and to take advantage of the entertainment industry in Los Angeles.

“USC has such great connections with the Trojan Family,” he said. “I think it is great for making connections because I have been told ‘every contact is a contract.’ ”

As Yli-Renko noted: “Our entrepreneurial students are great. They are ambitious, hungry for success, creative. The students reflect what we try to instill in the program, and that is to have a can-do, proactive attitude, not just learn from books but actually go out there and do it.”

Anthony Gharib and Rachel Grode were honored in an on-court ceremony, where members of the Hearn family joined them.