If you look closely at the photographs, you see a reflection of hope.

Consider the images taken by USC Neighborhood Academic Initiative (NAI) students during the time they spent on the USC campus. Those photos show them studying in class or depict the iconic campus buildings and the USC Trojan Marching Band.

“Many of the NAI students commented that they loved the USC campus because it was the one place where they felt peaceful and safe,” said Elaine Bell Kaplan, associate professor of sociology at the USC Dornsife College of Letters, Arts and Sciences, referring to the subjects of her new book, “We Live in the Shadow”: Inner-City Kids Tell Their Stories through Photographs (Temple University Press, 2013).

“USC is a place where people, other than their family, really cared about them,” Kaplan said.

The photograph Kaplan chose for her book cover depicts railroad tracks vanishing into the distance. One half of the photograph lies in deep shadow, the other in bright sunlight. Leafy trees line one side of the tracks, a dilapidated stone wall runs alongside the other. The elongated shadow of the photographer falls to the right of the shot.

This stark and symbolic image was taken by 12-year-old Cesar Hernandez, an NAI student who remained upbeat about his future. (To protect the children, Kaplan changed their names in her book.)

“I will do something with my life,” he said.

The book is a result of a two-year study that Kaplan undertook with 54 South Los Angeles middle school students aged 12 to 14. Most were participants in USC’s NAI, a seven-year academic enrichment program that prepares low-income children for admission to higher education.

Kaplan gave students disposable cameras and asked them to take pictures of anything that characterized their community. She then interviewed them about the resulting images.

“I wanted to find out what these kids think about their living conditions, family life, peer relations and academic achievement,” said Kaplan at a recent presentation of her book to students from the USC School of Social Work.

The project gave the children an opportunity to think critically about their environment as they try to make sense of the world. The results challenge false stereotypes about inner-city kids, namely that they are involved with gangs and drugs and have little regard for law and order.

Hernandez explored the meaning behind his photograph of the railroad tracks: “It’s about that we can choose our path, the dark or the light. The [railroad] tracks will get us away from the ghetto.”

Kaplan chose her photo and interview method because it “enables people in need to document their lives as only they can really know them.”

“Photography’s power lies in its dual role as an art form and a means to record facts,” she said. 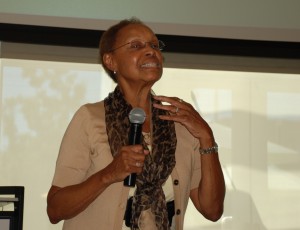 “Often the kids would use the photos as a way to set up the story line — a way to ease into talking about their experiences. The pictures took us onto the streets where they lived, into their classrooms and bedrooms, and onto the USC campus.

“The photographs taken by the kids gave a view of their lives that we frequently miss in our attempt to apply our own perceptions.”

Although the children in Kaplan’s study had experienced poverty, she said they all tried to do the “right thing”: stay in school, achieve academically, and avoid drugs and gangs.

Thirty-nine of the 54 middle school students who took part in the study were NAI participants. Those who stay in the program, graduate from high school and earn passing SAT scores will be offered a full financial aid package from USC and will also have the option of applying to other universities.

Here is Hernandez again, talking about the USC students who volunteer to work with the NAI children:

Children of shadow and light