They can weigh as little as 83 milligrams and have a wingspan of merely 3 centimeters. They fly in formation, communicate with one another, exhibit complex flight capabilities and can hover gracefully. No, they’re not bees; they’re microrobots.

Nestor Perez-Arancibia, a contributor to the famous RoboBee project at Harvard University, has joined the USC Viterbi School of Engineering’s faculty this fall as an assistant professor. Part of the school’s Department of Aerospace and Mechanical Engineering, he plans to continue his work with microrobots and expand on his main research theme in signals, systems and control.

Perez-Arancibia completed his bachelor’s and master’s degrees in engineering science in his native Chile. He then completed both a master’s degree and PhD in mechanical engineering at the University of California, Los Angeles. Most recently, he was a postdoctoral researcher at the Harvard Microrobotics Laboratory, where he developed control and signal processing algorithms.

“I decided to go to Harvard and work on microrobotics in the first place simply because flapping-wing flying robots are extremely cool,” he said.

After working with microrobots for the past three years, Perez-Arancibia plans to continue research in this area, perfecting high-performance control of individual flapping-wing robots. He will focus on making microrobots energy autonomous, more robust and better able to coordinate movements with one another, not entirely unlike a colony of bees.

Before his work with flying robots, Perez-Arancibia studied lasers and applied optics. The overlap of these two seemingly disparate research interests is control engineering. 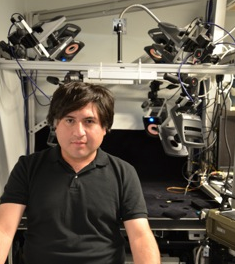 “The coolest thing about control engineering, and control theory in particular, is that it is ubiquitous in modern technology and also in contemporary science,” he said. “Common systems such as cars, airplanes and computers have hundreds to thousands of control loops inside them. Many subsystems inside the human body can be only understood using concepts such as input, output, feedback and stability.

“In my biased opinion, many problems in science, including fundamental problems in the social sciences such as economics, can be formulated as control problems.”

For this same reason, Perez-Arancibia’s other research interest is the brain-machine interface.

“My interest follows naturally from noticing that the human brain is the ultimate super controller,” he said.