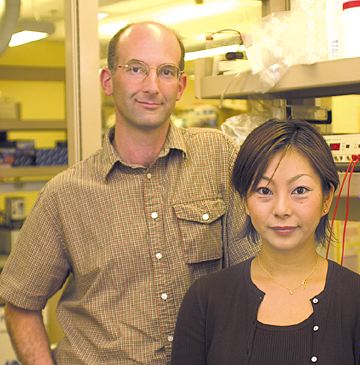 A new study reveals that control of the gene responsible for red blood cell production undergoes an unexpected genetic switch in the early embryo, a finding that may lead to a new treatment for anemia.

It has been known for a while that a gene called Erythropoietin, or Epo, which stimulates the production of red blood cells, is regulated by a protein called HNF4 and by the amount of oxygen the body’s tissues receive – which is why mountaineers produce more red blood cells than coast dwellers. But a new paper that appears in the April 1 issue of the journal Genes and Development details how in the early embryo Epo is regulated for a short period by retinoic acid, the active component of vitamin A.

The researchers have mapped out the process in which red cell production is first controlled by retinoic acid, then switches to control by HNF4 and oxygen availability in the embryo’s later stages and throughout adulthood.

“One thing that makes this result interesting,” said the study’s senior author, Henry Sucov, “is that this is not only a case of a gene transitioning from control by one factor to control by another factor, but transitioning from purely intrinsic, hormonal control to being physiologically controlled by what the environment is like.” Sucov is associate professor of cell and neurobiology at the Keck School of Medicine of USC and a researcher at USC’s Institute for Genetic Medicine.

While there are certainly other genes that go through similar transitions, few, if any, have so far yielded a detailed molecular mechanism that’s been worked out down to the level of DNA binding proteins and transcription, he added. Sucov said that graduate student Takako Makita deserves the majority of the credit for completing the study.

This basic research also opens up an intriguing possibility for stimulating blood production in anemic patients. Since Epo was once regulated by retinoic acid in all humans, perhaps retinoic acid could be used to stimulate red blood cell production.

“It might be possible to activate Epo expression with retinoic acid in a manner that doesn’t normally occur in adults,” said Sucov. “We’re looking into the possibility now. It’s a very appealing idea, and it’s easy enough to address in a way that also allows us to explore the basic science of the system.”

The drug now used clinically to treat anemia, Epogen, is expensive and difficult to administer, he said. Vitamin A has never been tested on anemic patients because no one ever suspected its early role in producing blood.

Switch in Red Blood Cells’ Production May Lead to New Anemia Treatment, a Gene Called ‘Epo’ May Hold the Key