The recognition and praise associated with a Medal of Honor for heroics during one of the deadliest battles in Afghanistan does not come easy to Staff Sgt. Ty Michael Carter. But that’s starting to change.

“I’ve learned to accept it because I now have a new mission.”

In the first of his day’s two visits on and off the University Park Campus on Sept. 3, Carter said he wants to use his newfound attention to destigmatize the invisible wounds of war — post-traumatic stress disorder.

“One of the things that prevent these individuals from seeking help is that they’re worried they’ll be treated different,” he said.

Carter’s audience was familiar with the challenges of reaching out to active duty service members and veterans to seek treatment.

“Staff Sgt. Ty Carter’s new mission is our mission — to save lives and improve the lives of our veterans and their families,” said Anthony Hassan, director of the Center for Innovation and Research on Veterans & Military Families at the USC School of Social Work, which hosted the event. “We cannot fail at this mission.”

USC is the first research university to offer a large-scale military social work program, and the center harnesses that expertise to rapidly increase the number of clinical social workers and behavioral health providers trained to treat the challenges faced by troops, veterans and their families. The program aims to promote community awareness and reintegration into civilian life through culturally competent care and evidence-based practices.

Carter echoed many of the research-based techniques that social work students, especially those in the military sub-concentration, have learned regarding how best to approach service members and veterans seeking treatment: Do not lie to them. Do not say you can relate to their situation.

“[Therapists] can’t understand what you go through, but hopefully they do understand the techniques for you to help yourself,” he said.

Carter also stressed the need for open dialogue about post-traumatic stress that includes educating families and loved ones. Typically the first lines of defense, they bear the brunt of the challenges experienced by returning veterans.

Ron Astor, Richard M. and Ann L. Thor Professor of Urban Social Development at the School of Social Work, said that what Carter did four years ago in battle was heroic, “but what you’re doing right now — opening up and educating society — is tremendous.”

The battle took place at Combat Outpost (COP) Keating, situated in a valley in Nuristan Province, Afghanistan, the site of one of the most intense fights of Operation Enduring Freedom. On Oct. 3, 2009, Carter and his fellow soldiers engaged with more than 300 insurgents for 13 hours. In the end, eight American soldiers died, 25 were injured and even more carried the unseen scars of what they had experienced.

For Carter, then a specialist, the images of what happened that day and after the battle remain clear. He remembers seeing Sgt. Justin Gallegos die after being struck by several rounds. He remembers wanting to render aid to a soldier and being told no by his sergeant. He remembers sleeping next to the burnt remains of the outpost. Worst of all, he remembers how the soldier he rescued and tried so hard to save, Spc. Stephan Lee Mace, later succumbed to his wounds and died. 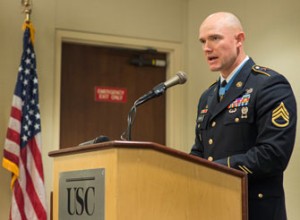 Carter talks about post-traumatic stress at an event sponsored by the USC Center on Innovation and Research on Veterans & Military Families. (Photo/Andrew Taylor)

“Because of that, I believed I was a failure,” Carter said. “I felt others were ashamed to be around me.”

Carter resisted initial attempts at receiving help, saying he didn’t believe he had issues. But the permanent ringing in his ear was a constant reminder of what he had been through, and he sought to drown out the noise — at bars.

Eventually, with the support of his family, friends and unit, he began to deal with his post-traumatic stress and has survived the secondary battle.

Later in the day, Carter visited the USC Institute for Creative Technologies (ICT) to get a firsthand look at how the Army-sponsored research center is turning its virtual reality advances into cutting-edge tools designed to build resilience, develop leadership skills and address post-traumatic stress and traumatic brain injury.

Carter saw demonstrations of ICT prototypes that leverage entertainment technologies for treatment instead of play, including Bravemind, a virtual reality system for conducting exposure therapy, and Jewel Mine, a customizable rehabilitation game that uses Microsoft Kinect to track movement.

“Young people today relate to material presented in video games,” Carter said. “Technologies that help soldiers stay interested so they want to do these types of training or therapy are on the right path.”

Researchers showed Carter how far the institute has come in developing believable virtual humans that can speak, understand and gesture like real people. He visited ICT’s Graphics Lab, where research into creating realistic digital doubles is applied to Hollywood blockbusters and Army training prototypes.

He also entered the Gunslinger saloon, where computer-generated characters take on the iconic roles of the Western bartender, bad guy and damsel in distress, while a real person plays a Texas Ranger who must save the day. The mixed-reality scenario demonstrated the degree that story, character and advanced technology all play a part in getting people immersed.

Carter also experienced Elite, a training prototype for learning and practicing counseling skills that uses a virtual human role player. He met Ellie, a virtual human guide that is part of SimCoach, ICT’s online platform designed to assist military personnel and family members in breaking down barriers to care by providing anonymous support.

“Just talking to a virtual human and getting information and resources might be an excellent first step for someone who is having an issue,” Carter said.

Carter’s visit provided ICT scientists with an opportunity to hear from someone who their research is designed to assist.

“It was an honor to have combat hero Staff Sgt. Carter here,” said Randall Hill, executive director of ICT. “He demonstrated exceptional combat leadership and is now shining a light on the hidden wounds of war. We felt privileged to show him some of the work we are doing to help in this area.”

About 1 in 3 Black, Asian and Latino people have experienced at least one incident of COVID-19 discrimination, according to an ongoing national COVID-19 attitudes study from USC Dornsife. Incidents include being threatened or receiving poor service at restaurants or stores.

She came to USC to start a lab — one that today holds a key resource in the fight against COVID-19 — and to be herself.

The invisible wounds of war