A recent meeting between President Barack Obama and Chinese President Xi Jinping was the focus of the second installment of the 2013 Journalism Forum series hosted on Sept. 3 by the USC Annenberg School for Communication and Journalism.

University Professor Geoffrey Cowan, director of USC Annenberg’s Center on Communication Leadership & Policy and president of The Annenberg Retreat at Sunnylands, and Clayton Dube, director of the USC U.S.-China Institute, a program overseen at USC Annenberg, talked about the importance of the Sunnylands summit with help from Archey Lee, a graduate student studying public relations at USC Annenberg.

Sunnylands has hosted presidents in the past, including Richard Nixon and Ronald Reagan, but the most recent event represented a step forward in the estate’s global significance.

“Sunnylands was actually a player in the news about the summit,” Cowan said, pointing to a quote from political scientist Joseph Nye, who said the summit was the most important meeting of two national leaders since Nixon met with Chinese Chairman Mao Zedong.

In a PowerPoint presentation, Dube provided various data focusing on the relationship between the United States and China. The two nations, he showed, dominate global significance in terms of gross domestic product and military spending, as well as in carbon dioxide emissions. The countries also do a tremendous amount of business with each other. 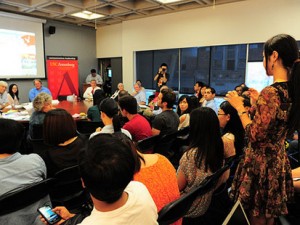 Dube recounted news coverage from the day after the summit to demonstrate how American and Chinese media differed in their approach. Some of the most prestigious U.S. newspapers featured the summit as top stories. The Los Angeles Times, for example, had a front-page picture of the two leaders walking in the 104-degree heat on the Sunnylands estate in Rancho Mirage, Calif. Time magazine featured Sunnylands in its article about the summit.

Some of the coverage by American media was inaccurately reported, according to Cowan. The New York Times published a story that said first lady Michelle Obama would be attending, which Cowan said was never the case.

Much of the Chinese media coverage had a uniform approach — some of the country’s top newspapers actually had an identical layout.

Lee’s research of posts on China’s microblogging server Weibo showed that many people in China speculated about the more sensational elements of the summit, such as what the leaders would eat, how they would greet each other and about why Michelle Obama chose not to attend.

“People predicted that not many concrete outcomes would come from the summit,” Lee said. “And they were right.”

At the summit, Obama and Jinping reportedly discussed cybersecurity issues, but Cowan pointed out that the more general reason behind diplomatic relations between the two leaders relate to the avoidance of future military conflict between their nations.

Outside the summit, protesters with opposing agendas showed up to demonstrate against the Chinese president, including people from the Free Tibet movement and Vietnam. Counter-protestors, i.e. China supporters, also heightened tensions. In the end, the Chinese president took different routes to arrive at and leave the estate, not coming into contact with the protesters

Cowan said that with more than 2,500 students coming to Los Angeles from mainland China, USC is in the unique position of analyzing U.S.-China relations with the involvement of students from both cultures. He said that recent studies have shown there is diminishing trust between the two cultures, and Dube’s presentation highlighted different apects of the two cultures’ relationship to each other.

“Each of us is more negative toward each other than the rest of the world is to us,” Dube said.

The U.S.-China Institute was established in 2006 by then-Provost C. L. Max Nikias. In the fall of 2011, the Annenberg School took over, offering specific programs looking into public diplomacy, new Chinese media and reports on economics.

In his introductory remarks, USC Annenberg Dean Ernest J. Wilson III said that because of the studies indicating diminishing trust between the U.S. and China, the school wanted to “figure out what the broader Annenberg family can do to improve trust.” He added that a handful of USC Annenberg professors speak Mandarin.

“International studies are a very good thing,” Cowan said, stressing that USC Annenberg and The Annenberg Retreat at Sunnylands will continue to cultivate and understand the relationship between the United States and China.