“What emotion is this?” he asked the audience at Cammilleri Hall.

“Mystery!” someone replied. “Inquisitive,” responded another.

With the bow, Ma played controlled, short, low notes. “What about this?” he asked.

“Mournful,” an audience member offered. Others called out “anguish,” “longing” or “solemn reflection.”

By the time Ma launched into the prelude from Bach’s Cello Suite No. 1, audience responses grew more complex. They said the music reminded them of driving through the countryside in a Rolls-Royce convertible, or finding an open space and escaping to freedom, or negotiating Heathrow Airport.

“Which terminal?” asked Ma, the winner of multiple Grammy awards, the National Medal of Arts and the Presidential Medal of Freedom.

Ma was demonstrating the variety of emotions communicated from musician to listener. It was part of a 2 1/2-hour event on Aug. 28 that exemplified the kinds of arts and sciences collaborations taking place at the Brain and Creativity Institute (BCI) based at the USC Dornsife College of Letters, Arts and Sciences.

“This is one more occasion to remind people that the BCI is alive and well, thanks to the enormous support of Dana and David Dornsife,” Damasio said, also acknowledging the generous support of Joyce Cammilleri, without which the hall could not have been built.

The Dornsifes, Kay, Hanna Damasio, Cammilleri and Yasuhisa Toyota, the acoustician who designed the concert hall, were among those in attendance.

Much of the event involved a dialogue between Damasio and Ma, followed by interaction with the audience. In introducing Ma, Damasio told the crowd that the cellist has a very serious side.

“Yo-Yo Ma is extremely interested in his place in the world and in how we can make this world a better place,” Damasio said. “He’s also interested in education. Now. How does all of this interact with the Brain and Creativity Institute? In a very intriguing way.”

One theme behind BCI is the research on the creative process and within that sphere, a major focus is music, Damasio said. Another BCI theme is the human condition — the effort to solve a range of problems: personal, societal, economic and political.

“We are trying to understand the problems of humanity better. These are problems which have been recognized over the ages, but are still with us today and in some respects worse,” Damasio said. “We now see that neuroscience — the science of the brain — can help in some way illuminate these problems and illuminate how humans relate and cope with these problems.”

This is where music comes in.

“It is possible that there’s more to music than the fact that it’s extremely pleasant to hear and play,” Damasio said. “There’s something very intrinsic to music that deals with humanity and that helps us change and become better citizens, more capable of coping with life effectively.” 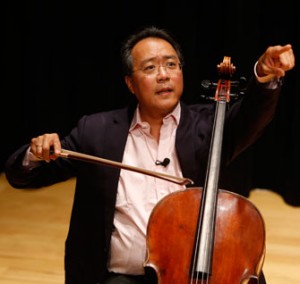 Ma gets audience members involved in the discussion about music and the brain. (USC Photo/Steve Cohn)

Damasio and Ma discussed one current BCI study that seeks to understand what happens to the brains of young children learning music using the El Sistema method — sometimes referred to as “passion first, refinement second.” Developed in Venezuela, the method teaches children with few resources to overcome adversity by first strengthening their spirit through music.

Led by the Damasios and BCI neuroscientist Assal Habibi, herself a classical pianist, researchers are following children for five consecutive years from the start of their musical education, using standard psychological assessments and advanced brain imaging to track their brain, emotional and social developments.

An expert on musical education from the USC Thornton School of Music, Beatriz Ilari completes the research team, which includes several graduate students of music and neuroscience.

The team is collaborating with the Los Angeles Philharmonic and two groups related to it, the Youth Orchestra of Los Angeles and the Heart of Los Angeles. The project will offer new insights and data about the role of early music engagement in learning and brain function.

Ma, a member of the BCI board, is an adviser on the study. So are the renowned conductor and pianist Daniel Barenboim and USC Thornton’s Midori Gotō, a USC Distinguished Professor and Jascha Heifetz Professor of Strings.

At the event, Ma attributed part of El Sistema’s success in making children better citizens to giving them a sense of identity and place in society. Trust also plays an integral role, he said.

“In order for El Sistema to get participation from the kids, they had to build trust,” Ma said. “Trust is absolutely crucial. The best way to create trust is to know someone has your back. … The program lets the kids know they belong to a group. They are going through the same things together.”

Damasio is researching whether music, heard or performed, can affect brain development.

“It’s perfectly fine to reflect on musical aesthetics,” Damasio said. “But we also need to understand the underlying biology. I suspect we will even be able to understand why and how music reduces personal pain and increases joy.”

The “edge” theme inspired several researchers in the audience, whose members said they were energized by the light tone and ease of the dialogue between two good friends.

Mary Helen Immordino-Yang, BCI researcher and assistant professor of education, psychology and neuroscience, asked Ma how he is able to let go of the need to always understand what he is creating in music.

“You said it’s OK not to know and always explore that ‘space edge,’ ” she said. “To explore the space to create new ideas and not just false space — falsely objectifying when we don’t have the evidence to do that. How do you hold onto that?”

Ma said that can be done when one always remembers his or her passion.

“Remember why you’re doing it in the first place,” Ma said. “Otherwise, you’re just calling it in. Get into that space where you want to give it your all.”

After the event, Habibi said the discussion and music reaffirmed her interest in the intersection of arts and science.

“Yo-Yo Ma brought up an interesting topic, ‘the edge effect’ or the point of intersection — which resonated with me,” she said. “As a scientist and musician, I’ve been looking for opportunities to have my two varied backgrounds come together and working at the BCI has provided that unique opportunity.”

Glenn Fox, a BCI alumnus and postdoctoral researcher at the institute, said what he took away from the conversation can be summed up in a single word: connectedness.

“The conversation showed that music and neuroscience, and by extension every other human pursuit, are related in very deep and meaningful ways,” Fox said. “Because of this connectedness, we as curious human beings need to seek out every angle of an inquiry to find the true understanding of the basic tenets of any given phenomenon — no matter how superficially unrelated they may seem at first glance.”

Morteza Dehghani, research assistant professor of computer science and psychology at the BCI, said he was humbled by Ma’s humility.

“He’s one of the most down-to-earth people I’ve ever met,” Dehghani said. “I was amazed that he told us he still gets anxious before going on stage. As a scientist, and specifically as an interdisciplinary researcher, his message about ‘working on the edge’ was truly inspiring.

“The fact that as a young musician he recorded music from different genres and other musicians didn’t look favorably at that reminded me of my own research —working in two different fields of computer science and psychology,” Dehghiani added. “Not belonging in traditional academic categories. But he also said that it was the fact that he didn’t belong in one box that made him who he is today.”

James A. Muhammad will oversee Classical California, the No. 1 classical music radio station network in the nation, which operates KUSC-FM in Los Angeles and KDFC-FM in San Francisco.