These are words some of USC Dornsife’s 1,700 incoming freshmen and transfer students used to describe how they felt on Move-in Day. During Welcome Week, students and their parents were warmly greeted by USC President C. L. Max Nikias and USC Dornsife Dean Steve A. Kay.

Inside a dormitory room at Fluor Tower, John Marot unpacked a cardinal T-shirt emblazoned with the words in gold: Trojan Family Member Since 2013.

His father, John, who had traveled from South Korea, where he is a history professor at Keimyung University, silently considered his 19-year-old son for several moments.

“Living abroad eight months out of 12 has been hard,” the elder Marot finally said. “This is a major turning point in his life.”

Overcome with emotion, the elder Marot stepped back and wiped away tears.

This was one of many heartfelt scenes during Move-in Day at University Park Campus on Aug. 21. Marot was among more than 1,100 first-year and 600 transfer students welcomed into the Trojan Family at the USC Dornsife College of Letters, Arts and Sciences this week. On Move-in Day, students received a hardy welcome from USC President C. L. Max Nikias. USC Dornsife parents were invited to a special event, where they met USC Dornsife Dean Steve A. Kay, vice deans and advising staff.

On Aug. 22, the new students attended a lunch event in the Ronald Tutor Campus Center. Vice deans, faculty, students and staff warmly greeted the new Trojans. At the event, incoming students had the opportunity to speak with academic advisers and learn about research opportunities, majors and minors, overseas studies and other programs, clubs and academic organizations at USC Dornsife. They ate Pink’s Hot Dogs and won a couple of bicycles from a raffle.

Back at Fluor Tower, Marot described why he decided to major in biological sciences and chose USC Dornsife.

“It began with my fascination with blue whales,” Marot said. “I found it amazing that life has evolved to become so complex over millions of years.”

He took a biology course in high school and was further intrigued. His older sister, who graduated from Princeton University with a bachelor’s in biology, is now in medical school. Marot decided to follow in her footsteps and is interested in becoming a doctor.

Marot’s mother, Elaine, graduated from the USC Division of Occupational Science and Occupational Therapy in 1991.

“My mom told me stories about her time here at USC, then I did my own research,” said Marot, who toured the campus, talked to students and learned about the Department of Biological Sciences.

As she made her son’s dorm bed, Elaine Marot said the day was bittersweet.

“But in a way, I’m graduating to a new life, too. This means fewer dinners and fewer lunches to make,” she said with a laugh, adding, “I’m so proud of him.”

Marot didn’t have to move far. His family home is in Santa Monica, Calif.

“I didn’t go away to college myself, so I wanted my son to have the full experience of college life,” Elaine Marot said of her son moving into a dorm. “He’ll be meeting new people. It’s important to give him that independence.” 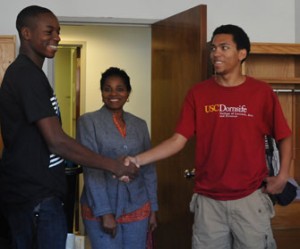 Just then, Marot’s new roommate arrived with his family. Alex Adeleye of San Ramon, Calif., is a bio medical engineering major at the USC Viterbi School of Engineering. The two strangers shook hands.

“This whole experience feels surreal,” Marot said later. “I’ve always dreamed of this day. Sometimes, it feels that it came too soon. It’s time for me to go out and explore the world.”

Inside a dorm room at nearby Webb Tower, new roommates Chloe Wang and Abby Gargett met for the first time. The two already have at least one thing in common. Neither knows Los Angeles. Gargett of Santa Cruz, Calif., came to the city once and only to tour the USC campus. Wang is an international student from China, and this is her first time in the United States.

Wang’s major is undecided and she’s eager to explore her options. Gargett will major in human biology and is interested in forensics. The pair forwent the handshake and gave one another a warm hug. Both launched into hanging up their clothes in their shared open closet.

Gargett’s mother, Stephanie Lambetti, helped her daughter unpack. The pair had driven the scenic route along Pacific Coast Highway from Santa Cruz to LA. The ocean views were stunning, but they were both exhausted.

When asked where they saw themselves in 20 years, Gargett and Wang laughed. 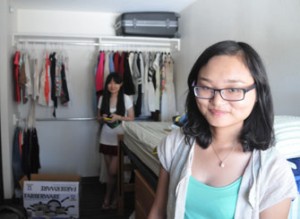 Chloe Wang, an international student from China, is undeclared in her major. (USC Photo/Pamela J. Johnson)

“Twenty years!” Wang exclaimed. “I have no idea.”

“Ask me where I see myself in five days,” Gargett said. “Right now, I can almost see myself finished unpacking.”

Wang meandered off to meet her new dorm mates. She was happy to meet Emily Wang, an international student from Thailand who speaks some Chinese.

It was a beginning.