“Today USC is a place where more than 48,000 applicants competed for 2,650 spots in the freshman class,” Nikias told students and their families gathered in Alumni Park for the ceremony. “We searched far and wide to find you. In the last year, our admissions staff visited 2,200 high schools in all 50 states and 15 countries — more than any other university. If you feel very special that you are here today, it’s because you are. And you deserve it.”

The ceremony included remarks from faculty, academic deans and senior Christian Kurth, president of the Undergraduate Student Government. Kurth offered advice — often humorous — on things he wished he’d known as a freshman, such as remember to sleep, don’t forget to call parents and siblings, use Facebook responsibly, learn to like coffee, get involved on campus and “don’t do your laundry on Sundays because everyone on the planet does their laundry on Sundays.” 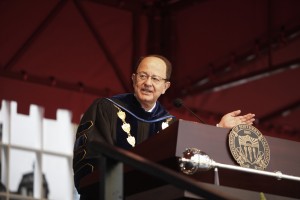 “If you feel very special that you are here today, it’s because you are. And you deserve it,” says President Nikias to the incoming class. (USC Photo/Steve Cohn)

Leah Hansen and Yue Qian, both incoming USC Thornton School of Music performance majors, entertained the crowd with their rendition of Handel’s “Passacaglia in G minor.” Hansen began studying cello at age 3 and five years later became the youngest winner of the L.A. Cello Society Scholarship Competition. Violinist Qian has performed in concert halls throughout the world, including Shanghai and Chicago, and has participated in music festivals in Austria, Germany, Canada and the United States.

Extending a greeting from USC faculty, Deborah Harkness, history professor at the USC Dornsife College of Letters, Arts and Sciences, and author of the best-seller A Discovery of Witches, urged the student audience to “be present, in your classes and in your interactions with your fellow Trojans. Take a moment right now to look around you. If you are on a cellphone — and I know some of you are — get off it. Absorb what it is to be part of one of the most diverse student bodies in this country, living in one of the most diverse cities in the world.”

The ceremony concluded with deans from USC’s 19 schools officially bestowing upon their students “all the rights, responsibilities and privileges accorded to the University of Southern California community of scholars.”

In his closing remarks, Ainsley Carry, the new vice provost for Student Affairs, encouraged the incoming class of 2017 to get involved in social justice.

“Millions suffer needlessly from hunger, poverty, educational inequities and environmental abuse. You are the generation we have been waiting for,” Carry said. “You are surrounded by the best scholars and scientists in the world. Use your time and resources at USC to bring an end to a social challenge that you care about.” 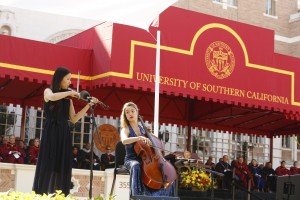 Sitting amongst other parents bidding their “babies” farewell was Wanda Cowart from Parker, Colo. Holding back tears, she talked about her daughter, Chynna, whom she adopted as a single mother 17 years ago.

“I feel really good about her decision. I think this is a great school, and she worked very hard to get in. I’m really excited about that, but she’s my only child,” said Cowart, who drove 16 hours to help her daugther, a dramatic arts major, move into her residence hall. “She will be a good fit. You can really feel the family atmosphere here.”