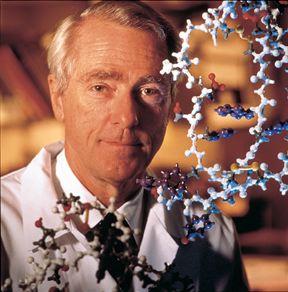 W. French Anderson, the physician and scientist who carried out the first human gene therapy clinical trial, will discuss the ethical issues involved in human genetic engineering and how science fiction has shaped the public’s perception of this budding new technology, Thursday, May 3, at noon, in USC’s Mayer Auditorium.

The lecture, titled “Frankenstein, GATTACA and Gene Therapy,” is free and open to the public. Mayer Auditorium is located on USC’s Health Sciences campus.

In his talk, Anderson will analyze the book “Frankenstein” and its filmic progeny and discuss how the Frankenstein story has captured the public’s imagination. He will also examine the ethical and moral issues raised by the book and movies and address the charge that, like Dr. Frankenstein, today’s geneticists are attempting to “play God.”

Anderson will evaluate the 1997 movie “GATTACA,” a cautionary tale about injustice in a 21st century society run by genetically “superior” elites. Anderson, who was a scientific consultant for the movie and is now proposing to carry out the first in utero gene therapy trial, will discuss the film’s impact on the public’s understanding of genetic engineering.

“The message of “Frankenstein” that attracted people in 1818, and still energizes people today, is: How much is too much in science? Are there experiments that should never be done? And if so, why not?” said Anderson. “What we have to do is determine how to make the best use of technology without suffering the horrendous consequences of its misuse. The only protection we as a society have is an educated, informed public, a public that understands the good, understands the bad, and puts stopping points on the slippery slope that would otherwise lead to a “GATTACA” society.”