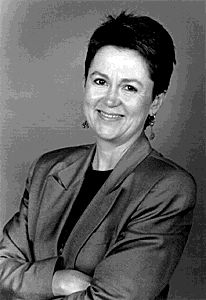 Elizabeth Monk Daley has been named executive director of the AnnenbergCenter for Communication at USC, president Steven B. Sample announcedDec. 8. Daley, who is also dean of the School of Cinema-Television,will hold the two wholly separate positions concurrently.

The Annenberg Center was established in 1993 through a $120 milliongift from Walter H. Annenberg. It was the largest cash gift ever madeto an American university. The center – to become the world’s leader inthe development, study and teaching of communication arts and sciences- will stimulate collaborative research with special emphasis initiallyfocused on interactive media.

“We are undertaking a new initiative here at USC that we expect willplay a major role in the revolution taking place in communications,”Sample said in making the announcement. “In Dr. Daley, we have found avisionary who is excited by the new interactive media and whounderstands their potential to change every aspect of our lives.

Sample called Daley “without peer” in the depth and breadth of herunderstanding of the communications revolution.

“She was trained as a scholar of film and theatre, has taught andconsulted about film and television, earned her stripes as a televisionproducer and is conversant with the new communications technologies.Most important, she understands how to bring it all together – theartistic content, emerging technologies and entrepreneurial aspects ofthis revolution,” Sample said.

Commenting on her appointment, Daley said she “couldn’t pass up theopportunity to be at the nexus of research driving new communicationsbreakthroughs.

“There’s no question that the media future is going to be built from across-fertilization between science and art, technology and dreams,”she said. “The Annenberg Center provides resources that will help theuniversity really build on the synergy that already exists amongdepartments and use it in new ways.”

Being dean of cinema-television, Daley added, is “still the best job inthe world, and my passion for it has never been greater. The imperativeto find and fund new ways to encourage and educate creative talent fora rapidly changing film and television industry is something I wouldnot give up.”

Provost Lloyd Armstrong Jr. noted that as dean of cinema-television,Daley has been “extraordinarily effective in bringing the intellectualresources of a great university to bear on the artistic, technologicaland business issues now facing the entertainment industry.

“She has seized opportunities to work closely with deans and faculty inengineering, medicine, law, business, communications and thehumanities. This has put the School of Cinema-Television at theforefront of a whole range of issues normally not associated with thestudy of cinema,” Armstrong said.

“At the same time, she has brought some of the greatest talents in thefilm industry into the university to work with students and faculty indeveloping the ideas that will change the nature of communications aswe know it,” he added. “Because she is a highly effectiveadministrator, with boundless energy and entrepreneurial acumen,President Sample and I have great confidence that she will provideoutstanding leadership to the Annenberg Center in this earliest stageof its development.”

Elizabeth Monk Daley was named dean of the School of Cinema-Televisionin 1991 and holds the Steven J. Ross/Time Warner Dean’s Chair.

Prior to joining USC, Daley served as director of Taper MediaEnterprises and as a producer for MGM/UA Television. Her creditsinclude “Right to Kill?” for ABC, “Tell Them I’m a Mermaid” and “WhoParks in Those Spaces?” for Embassy Television and “Vestige of Honor”for CBS.

Prior to joining Taper Media, Daley founded a media consulting group inWashington, D.C., that produced a variety of art, educational,documentary and corporate programming for public television, thefederal government and the private sector.

She has served as a professor of film and television at AmericanUniversity and as a consultant to a variety of organizations, includingthe Electronic Cinema Festival, the National Endowment for the Arts,the National Institutes for Health, the American Association ofUniversity Women, the International Television Association and the JohnD. and Catherine T. MacArthur Foundation.

Her honors include an American Women in Radio and Television Award, twoLos Angeles-area Emmy Award nominations, the Cine Golden Eagle, theBarbara Jordan Award and the California Governor’s Award for herinvolvement in programming dealing with disability issues.

The Annenberg Foundation was founded by Walter H. Annenberg, U.S.ambassador to Great Britain from 1968 to 1974, former editor andpublisher of the Philadelphia Inquirer, former chairman of TrianglePublications Inc. and the founder of TV Guide as a nationalpublication.

In awarding the $120 million grant to USC in June 1994, Annenberg movedto establish the world’s foremost center for the development, study andteaching of communication.

Sample has called the gift a vote of confidence for USC and the entireSouthern California region.

“While a good part of the action is occurring in New York and the SanFrancisco Bay area, the center of gravity is clearly here in SouthernCalifornia. Thus the USC Annenberg Center has an opportunity to be apart of, and help shape, this communications revolution,” he said.