USC students studied the shifting political, social and economic landscapes in Cuba for the second consecutive summer as the result of a collaboration of three schools — the USC Annenberg School for Communication and Journalism, the USC Dornsife College of Letters, Arts and Sciences and the USC Price School of Public Policy.

“The underlying goal [was] to create a very intense experience in which you use every possible means to learn, so that students are obliged to open up their perceptions in a lot of different ways,” said Suro, who holds a joint appointment at USC Annenberg and USC Price.

“[It’s] the experience of … combining reading, writing, classroom work, interviews and laid-back conversations in a bar all as part of one educational effort.”

The group spent the first week together in USC class sessions before splitting to meet with academics and policy experts on U.S.-Cuban relations. USC Annenberg and USC Price students went to Miami; those from USC Dornsife traveled to Washington, D.C.

Upon arriving in Havana, the students reconvened and followed a weeklong schedule of morning seminars at the University of Havana followed by afternoon field excursions to cultural and social institutions throughout the region.

At the university, professors delivered lectures on Cuban foreign policy, media, economics and gender roles, giving students a taste of higher education under an authoritarian regime.

“It really challenged your ability to be a good public diplomat,” said Colin Hale, a second-year Master of Public Diplomacy student at USC Annenberg. “You’re going to hear things that you don’t always agree with, that don’t fit into your view — but it’s how you respond, how you react. It was a good learning experience.”

The group traveled together for some excursions — meeting with students at a training academy for foreign ministry and visiting with gay rights activists. They also ventured out on their own to find experiences relevant to their academic and personal interests.

According to Starr, the most memorable trip for the USC Dornsife students was visiting an artist’s cooperative in Cuba’s southern province of Cienfuegos.

“It was a community center for individuals with Down syndrome, and the tool that’s used to help them become more proactive and more involved citizens, despite their disability, is art,” she said. “The students got to see the project, interact with the students, their parents and also with the artists.”

In his independent excursions, Neftalie Williams, another USC Annenberg Master of Public Diplomacy student, found a deep connection with the oft-overlooked Afro-Cuban population.

“Being black and skating through Cuba, everywhere I went people wanted to stop me,” he said. “These two older gentlemen stopped me and said, ‘We just want to thank you. It’s amazing to see freedom — that’s what you are. What you’re doing is an important thing. It’s just good to see a black man doing what he wants to do.’ ”

For the bulk of their time in Havana, many of the USC Annenberg and USC Price students worked on a digital mapping project in conjunction with the Cuban Institute for Cinematic Arts and Industry and USC Spatial Sciences Institute. 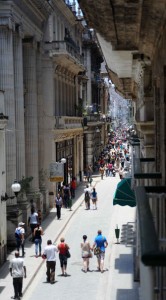 Calle Obispo serves as a microcosm for the economic and social changes occurring throughout the country. (USC Photo/Neftalie Williams)

The goal was to photograph and catalogue every business — public or private — on Calle Obispo, a one-kilometer stretch of Old Havana that serves as a microcosm for the economic and social changes occurring throughout the country.

“It’s a very historic street — it’s the oldest commercial street in continuous use in the Western Hemisphere,” Suro said. “It was initially laid out in 1518, so it’s a very old and historical place, full of stories, in addition to now being in the process of transformation.”

Students inventoried the products and prices of every business on the street, conducting more than 100 interviews and snapping hundreds of photographs throughout the process.

“My particular role was not just to map and catalogue everything, but to take photos that I thought would be culturally relevant,” Williams said. “Things are falling down around older people while new things are emerging. They’re trying to find their footing. That was my job, to look at what those changes were and things that I thought would be historically important.”

The collected data will ultimately be mounted on a geographic information system and interactive website through which users can remotely navigate the street.

“The idea is to use a map as a storytelling tool for text, data, video and photographs — they’re all about the multidimensional transition of Cuba as seen through this one place,” Suro said.

After 14 days in Havana, the students returned to the United States and promptly went to work on individual final projects, including photographic essays and investigative reports.

Following a period of decompression, the group reflected on what it said was a trip that challenged them to view the world through a unique prism.

“From an academic perspective, it helped teach me about patience,” said Hale, who explained that working in an environment hostile to U.S. affairs taught him important lessons about public diplomacy.

“It is a life-shaping, eye-opening experience that cannot be compared to anything else they do at USC,” Starr said. “Students were able to make friends and learn about Cuba from [them]. The art, music, culture and architecture is something they’ve never seen before, and it’s a country somewhat frozen in time — it’s a little bit like time travel.”

“What I really like about this experience is that no one knows how the story ends,” Suro said. “Cuba is up in the air, it can go in a lot of different directions. It challenges students to live with uncertainty, to say there’s not an answer here — we don’t know how the story ends. We’re used to things being prepackaged and tied up in a big bow, but this is a story that is very messy. It’s very much in progress.”