A successful minority business owner, Bonnie Nijst ’81 encountered sexism and prejudice on her journey to the top.

“I remember a time when someone came into my bureau for a meeting with me and said to my assistant ‘Hi. I’m looking for the Filipino girl with her own office.’ Well first of all, not a girl, second of all, not Filipino, and third, I have a name,” said Nijst, who shook her head in disbelief.

The USC Dornsife College of Letters, Arts and Sciences alumna is the president and CEO of Zeesman, a leading brand strategy and marketing firm. She also serves on the board of several nonprofits, including one devoted to helping minority businesses thrive.

“There are people who assume minority businesses are somehow inferior and that by bringing one in, they’re doing them a favor,” Nijst said. “We need to remind them that these are fully capable, often multimillion dollar enterprises with a lot to offer, some of them doing hundreds of millions of dollars in business a year.

“Promoting minority businesses is not about affirmative action,” she explained. “It’s about access. All people are asking for is an opportunity to compete.”

Nijst knows from personal experience what it means to be given that door-opening opportunity. For her, it came in the form of an acceptance letter to USC Dornsife, where she earned a bachelor’s degree in English. 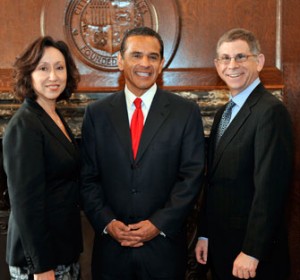 Bonnie Nijst and her husband, Arthur Zeesman, with former Mayor Antonio Villaraigosa, who named their company the 2013 Minority Professional Services Firm of the Year in May. (Photo/Valerie Goodloe)

The daughter of Indonesian immigrants, Nijst was born in the Netherlands but moved to Los Angeles with her family when she was a year old. She grew up in a predominantly Hispanic lower-middle-class community in Norwalk, Calif. Her parents ran an Indonesian restaurant nearby in Long Beach.

Nijst considers making it to USC Dornsife something of a miracle.

Neither of Nijst’s older siblings had gone to a university at that point, and she was planning to go to junior college when her high school English teacher, Anna Kerr, suggested she apply to USC. Kerr’s husband, Jack Kerr, was then a lecturer in public administration at the USC Price School of Public Policy and family members had earned a collective 11 degrees from the university. The couple had subsidized a study-abroad trip they led to Europe for Nijst, enabling her to travel to Italy, France and the United Kingdom while she was in high school. Nijst applied to USC and was accepted with a financial aid package without ever having laid eyes on the campus.

“The first thing I remember when I arrived at USC was just being completely overwhelmed,” she said. “It was exposure to completely different people, ethnicities and experiences.”

That experience of adapting to her new environment at USC is one that has served her well throughout her career as she counsels a diverse range of clients.

“The huge eye-opening thing about USC was that for the first time in my life, the people were as smart or smarter than me, or as driven or more driven than me, or more educated — or in many cases, way more educated — than me. I learned not to be intimidated because there are some things that other people are not able to bring, like people skills, or the ability to inspire, or commitment to something other than themselves.”

Nijst was a commuter student and at one point was working three jobs.

“I was so busy I never once during those four years made it to a football game,” she said.

She has fond memories of being mesmerized by Barbara Myerhoff, the late professor of anthropology and Oscar-winning documentarian.

“She was fascinating. It reminds me of what we do with companies when we go in to help them strategize. We have to observe the culture and get the lay of the land,” Nijst said. “There’s a sense of discovery there which is similar because every company is a foreign place — a different environment.”

Nijst considers herself fortunate that her parents were willing to invest in her education, something she said was unusual for daughters in the community where she was raised.

“My parents were very European in their thinking about education,” she recalled. “My father didn’t worry about me making a living, he just wanted me to get a good education.”

Nijst finds that education invaluable to this day.

“At USC I wrote papers every week about books I had never read before. You’d have to read and work out what the point was, and find a unique way to look at it. I still use those skills every day in my job,” she said.

Nijst’s degree also gave her confidence to trust that the necessary insights would come.

“You have to trust the process that something will bubble up and reveal itself,” she said. “You don’t want to have preconceived notions or you’ll miss the nugget.”

After graduating, Nijst worked briefly in administrative positions at Max Factor and then in communications with a nonprofit. She then spent five years at PR Newswire, the world’s largest private wire service, where she started as a copy editor before becoming the company’s first West Coast sales manager and then earned a promotion as Los Angeles bureau manager.

Nijst moved to international broadcast public relations company Medialink Worldwide as Los Angeles bureau manager. She then became Western Regional vice president, overseeing the Dallas bureau and opening an office in San Francisco. She stayed at Medialink for 11 years, taking the company public in 1996. Her last position was as vice president of corporate development for MCTV, the company’s corporate television division.

She spent a year with Internet startup Marketwire (previously Internet Wire) before joining Zeesman as vice president of business development in 2000. In 2003 she bought into the firm, founded by her husband, Arthur Zeesman, in 1990, becoming majority owner, president and CEO.

“At Zeesman we really pride ourselves on being marketing generalists,” she said. “What we specialize in is our highly strategic approach to all the work that we do.”

In May, her company was named 2013 Minority Professional Services Firm of the Year by then-Los Angeles Mayor Antonio Villaraigosa and the Minority Business Development Agency, a branch of the U.S. Department of Commerce.

“We were thrilled to receive this award that recognizes our leadership in brand strategy, marketing and design,” Nijst said.

“What I love about this particular award is that it’s for the company. To me it’s a tribute to the people who choose to bring their talent here to our company and to our clients. I’m really proud of that.”

Nijst is a firm believer in the importance of minority businesses, of which there are more than 600,000 in the greater Los Angeles area.

“Having a thriving minority- and women-owned business community is key to a diverse city like Los Angeles,” she said. “They’re a huge driver of the economy, especially in underserved areas, so when they thrive, the whole community benefits.

Nijst is also very active in the minority and women’s business communities, as well as the community in general. A former president of the National Association of Women Business Owners in LA, she is on the boards of directors for the Southern California Minority Supplier Development Council and the California Family Health Council.

Nijst, who became a U.S. citizen at the age of 30, is passionate about civic engagement and also serves on the board of the League of Women Voters of Los Angeles Education Fund.

Her future goals include continuing to grow her company, particularly in the entertainment and green industries and to stay on top of rapidly evolving technology, especially in the area of website development.

“As a minority, the challenge is that some people underestimate you,” she said. “The advantage is that they are ecstatic and become your biggest champions when you step up and surpass their — sadly, sometimes limited — expectations.”

Building a brand for minority businesses