On a recent summer’s day, all was quiet inside the USC Viterbi Startup Garage.

On the fifth floor of USC’s Information Sciences Institute, the garage’s home in Marina del Rey, about 40 budding entrepreneurs sat together at large nondescript tables hatching plans for the next Great American Startup.

The young entrepreneurs gulped cups of coffee, snacked on pretzels and stared at computer screens with a burning intensity. None of them seemed to notice the million-dollar views of Marina del Rey.

I had come to this space to document “A Day in the Life of the Garage.” As an entrepreneur’s son and former small business reporter for Inc. magazine and the Los Angeles Times, I had a healthy respect for business builders and admired their grit and guts. The garage offered a front-row seat to innovation and creativity. 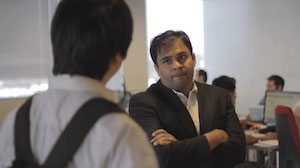 The brainchild of Ashish Soni, executive director of digital innovation and founding director of the USC Viterbi School of Engineering’s Student Innovation Institute, the garage provides financial support, mentoring and other strategic resources to a select group of USC student and alumni entrepreneurs over a 12-week period.

More than 90 teams competed for 10 spots in the accelerator, which launched in late May. Each team, co-founded or led by a current USC Viterbi student or alumnus, received $20,000 in exchange for 4 percent equity.

Building a successful business, much like making a movie or writing a novel, takes time. Every detail matters. Those who try to rush the process or cut corners will invariably fail. As such, my first four hours in the garage passed uneventfully.

At around 1 p.m., though, Taggle, an online reverse auction that brings together customized T-shirt buyers and local screen printers, scored a major victory.

Josh Wei, the company’s chief operating officer, stood up and announced that he had just received a preliminary order from Georgetown University worth about $4,500. Beaming, Wei exchanged high fives with his four fellow Taggle executives.

News of Taggle’s pending sale brought smiles and words of congratulations from garage team members, who exulted in the company’s good fortune. Everyone’s mood brightened, with the recognition that they could be next.

“I like being around all the founders and startup people,” said LookAllure CEO SunHee Yoon, who holds a PhD from USC Viterbi. “Although we do different work, we are similar. We are all passionate and want to create something.”

Added Jon Sutherland, the 23-year-old CEO of Everlab, the maker of a mobile app that allows users to record and share an audio annotation to tell a photo’s story: “We bounce ideas off each other, have lunch with each other and tend to mess around as it gets later in the day,” he said. “Everyone is really open and supportive.”

And they are committed. Most garage members log 60-plus-hour weeks, often eating at their desks. A few push themselves so hard that they have to take catnaps on corner couches. Several participants made great sacrifices to join the program, all for the chance to control their own destinies.

Everlab’s Sutherland left a fast-track position at Cornerstone OnDemand, a Santa Monica software company, to start his nascent firm. Taggle’s Chief Marketing Officer Sarah Bernosky turned down a summer internship at Morgan Stanley. Greg Lou MS ’06, CEO of Racevine, a website that aggregates and reviews thousands of endurance races around the country, left a good job at New York City-based and KPCB-backed Quirky for the garage.

“You’ve got to try your own thing at some point,” Lou said. “You have the rest of your life to work at some big company.”

At about 9 p.m., the garage cleared out, with Racevine’s Lou the last to leave. Trashcans overflowed. Soda cans, plastic water bottles and papers blanketed desks.

Early the next morning, the garage once again filled with the burgeoning entrepreneurs, fueled by dreams, ambition and caffeine.

Can’t find time for the people who matter most? There’s an app for that

Wellsayer, an app developed by an entrepreneurial USC Gould student, focuses on well-being by helping users schedule and manage relationships.

The center launched in 2015 to help startups reach the next level of success.

Co-owner’s experience in Bridges to Business program helps her spread the word on Mesoamerican fare at Milpa Grille.