New research by Peter Ralph of the USC Dornsife College of Letters, Arts and Sciences has confirmed that everyone on Earth is related to everyone else on the planet. So the Trojan Family is not just a metaphor. Turns out, we’re also linked by genetics more closely than previously thought.

The assistant professor of computational biology’s background in math and statistics enables him to develop methods and models and perform data analysis on genomic data, which he uses to learn about evolution and demography.

His latest research, conducted with Graham Coop, a geneticist at the University of California, Davis — his former postdoctoral adviser — provided DNA-based evidence to confirm the mathematical theory that everyone on Earth is related.

“But when we get to 40 generations ago, in the time of Charlemagne, we arrive at a trillion ancestors and that is a problem because we now have more ancestors than there were people. Thus one can deduce that a lot of those ancestors must be the same person.”

“At first it does look like a tree, with the branches doubling every generation, but then pretty soon the branches start running into one another, and it begins to resemble more of a web-like tapestry as distant cousins marry and share a set of distant grandparents,” he said. “That means that although hardly anyone marries their cousin in Western Europe, many people are unwittingly marrying their 30th cousin.” 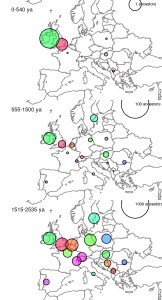 A map showing where the distant cousins of modern-day people in the United Kingdom live, partitioned by the age of their common ancestor (top being most recent). Bigger circles mean more ancestors. (Graphic/courtesy of Peter Ralph and Graham Coop)

Since the publication of Chang’s paper, huge advances in the collection of genetic information have allowed scientists to compile vast DNA databases.

Ralph and Coop focused on the ancestry of Europe by using the Population Reference Data Sample, which provides whole genome sequencing data on 2,257 people living in more than 40 European populations. The researchers chose this sample because it provided a particularly good match of geography to a genetic data set.

The DNA sequences it provided also covered 500,000 locations on the genome known to indicate individual variations from person to person. Using a computer program, the researchers were able to find identical, or nearly identical, DNA sequences and use these matches to work out who was related to whom.

Ralph and Coop identified 1.9 million shared segments of DNA that were millions of base pairs long, proving their owners were related. They were then able to estimate how long ago their common ancestor lived from the length of the segment.

“So the longer ago an ancestor is, the shorter the chunk is likely to be.”

He added, “Our research confirmed what Chang suspected — that everybody who was alive in Europe a thousand years ago and who had children is an ancestor of everyone alive today who has some European ancestry.”

Ralph and Coop calculated that these shared segments showed ancestors stretching back some 3,000 years, or 100 generations. This lends support to Chang’s calculation that by expanding his model from living Europeans to everyone alive on Earth, an all-ancestor generation would have occurred some 3,400 years ago.

“On top of that, it was surprising the extent to which you could also see the effects of history in the patterns we found,” Ralph said.

While their research showed that Europeans living closer to one another were also more closely related, it revealed that people in Eastern Europe tended to have more shared ancestors than Western Europeans.

“We could really see the demographic effects of the Slavic expansion in Eastern Europe around the time of the fall of the Roman Empire,” Ralph said.

“In a population expansion, people are having more children than in a stable population. So, if that larger, expanded generation traces their family back through time there is an increased opportunity that they will have shared ancestors because the pool of potential ancestors is smaller.”

Ralph’s research has the potential to help solve long-standing questions in various areas, including history, archaeology, linguistics and ecology.

For example, his findings may help settle the debate over the Germanic tribes who sacked Rome and whose movements have been dubbed “Barbarian Invasions.” Differing historical viewpoints maintain either that the Germanic tribes took over and displaced the population or alternatively that the “invasion” consisted more of small groups moving in and establishing themselves as leaders.

“Clearly these two views have very different demographic implications,” Ralph said. “The integration of a small number of people is very different to the driving out and replacement of an existing population.”

By analyzing the number of common ancestors in a particular area, Ralph might be able to determine migration patterns, including the numbers of people involved.

“While we did see the effect of the Slavic expansion, we didn’t see a similar effect on the areas that the German tribes moved into, suggesting their movements were those of small groups involving less large-scale displacement,” Ralph said.

“Our research lends itself to cross-departmental collaboration,” he continued. “It would very interesting to work with historians or archaeologists on projects, such as finding out whether people living in places connected by Roman roads have greater numbers of shared ancestors.”