During a tropical downpour, Fan Fan and several of her classmates entered Victoria Park in Hong Kong one night in June. In every direction, people huddled under umbrellas, dressed in mourning black and held flickering candles. Thousands had filed into the park for the 24th anniversary vigil of the 1989 pro-democracy protests in Beijing’s Tiananmen Square, where Chinese leaders sent troops to stop the student demonstration by opening fire, killing hundreds.

For Fan, who was born in China and raised in the United States, the chance to experience the annual vigil was paramount.

“The events at Tiananmen Square really resonate with me,” said Fan, a senior majoring in comparative literature with an emphasis in Spanish and a minor in Chinese history at the USC Dornsife College of Letters, Arts and Sciences. “Though I’m American, I feel connected to the people and that conflict.”

In Hong Kong for the Problems Without Passports comparative literature course “Culture and Travel in Hong Kong and Macau,” Fan saw firsthand how Hong Kong residents commemorate the 1989 tragedy. Though Hong Kong is technically under a different law from mainland China, the event reflected Hong Kong’s heart for its compatriots, Fan said, and its increasing disaffection with rule by China.

The experience also embodied part of the course’s mission: to help students gain a personal perspective on the cultural history of Hong Kong and Macau.

In preparation for the trip, students spent a week in Los Angeles reading and discussing literary and historical texts related to the Pearl River Estuary, a central hub of China’s economic growth and a major site in the history of early global capitalism. Students also watched films, read short stories and theoretical texts, and learned about the art of the region to gain a better understanding of Hong Kong and Macau. 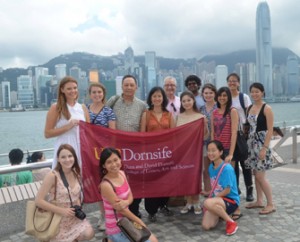 Under the principle of “one country, two systems,” both Hong Kong and Macau maintain their own ruling systems separate from China, though many locals, especially in Hong Kong, purport that there is too much control from Beijing. The histories and contemporary culture of the two regions incorporate various ethnicities, religions and backgrounds.

Spending two weeks in each city, students met for class for two hours each weekday morning, then traveled for the remainder of the day, visiting various locations and meeting with experts.

In Hong Kong, students had the opportunity to sit down for tea with Jiang Yu, deputy commissioner at the foreign affairs ministry, to discuss Chinese international policy and the relations between Hong Kong, Macau and China. The meeting was arranged by Cristina Hansell of the U.S. Consulate General for Hong Kong and Macau, who also welcomed the group in her home. Students also met with Mike Chinoy, former CNN senior Asia correspondent at the news agency for more than 30 years. Chinoy is now a senior fellow at the USC U.S.-China Institute.

For students, being on the ground in each city added a significant level of understanding to their studies.

“It was incredibly important to actually be in the cities of Hong Kong and Macau,” said Vivian Yan, a senior majoring in history and comparative literature. “In Los Angeles, from the books and articles we read, you shape an idea of what a place is. That idea never quite matches with the reality.”

For instance, as part of the students’ pre-trip preparation, Yan and her classmates read about the early history of Macau, where gambling has been legal since the mid-19th century.

“Going to Macau to ‘see’ history was very different than we might have expected. Macau has an incredibly rich history alongside its famous gambling scene,” said Yan, noting that in addition to preserving old buildings, the city in recent years has added Portuguese pavement, an artful paving style using black and white stones, with the goal of making the city appear older to tourists.

As part of the course, each student completed two short writing assignments exploring a theme in Hong Kong and Macau, as well as a larger research project on a cultural topic of their choosing.

“The structure was set up very much like a graduate-style seminar,” Lee said. “Students had to write a research proposal beforehand and do preliminary research on a topic.”

They were also encouraged to apply for funding from the Summer Undergraduate Research Fund, as well as other scholarships, to support their study abroad experience.

“So they had the practice of writing a proposal, thinking about their research, and once they were in the cities, they had to test out their projects on the ground,” Lee said.

“It was a very intense program of learning, contemplating, then writing back at the hotel,” Cheung said.

Their final projects became the basis for an online collection of writing to inform future travelers — a guidebook with a cultural perspective.

“The entries are informed by research, but also by the students’ own personal observation of each city,” Díaz said.

For her project, Yan studied the trend of “roots tourism,” also called “heritage tourism,” in which a person travels to the country of their ancestors’ origin to uncover their personal history. She wanted to better understand the tourism trend and the reality of investigating one’s origins, fueled by her own personal story.

“I’d grown up hearing stories from my parents about their childhood in Hong Kong where they were born, and I had an image in my head of the city full of Cantonese speakers just like my parents,” she said.

Instead, her experiences in the city revealed a multifaceted culture with people from many backgrounds who spoke a number of languages.

“Hong Kong is an incredibly complex place, and the ideas I had about being ‘Chinese’ versus being from Hong Kong were definitely challenged by both Hong Kong’s history and by current events there,” she said.

“Entries in the online guidebook address different disciplines,” Díaz said. “One will focus on international relations, another on history or photography. But a lesson from literary studies is that each writer is free to speak of his or her own experience as well.”

Overall, Yan said the course has opened up her perception of what it means to study and understand questions of identity and memory, particularly when it comes to tourism.

“I’m definitely inspired to pursue these sorts of issues further,” she said. “I’m hoping to spend more time in Hong Kong in the future.”

Unchained Scholars brings together social work students who were system- or justice-impacted, along with their allies, to organize events and offer one another support.