High school students from across the globe have traded in the rest and relaxation of summertime for a pen, notepad and an intensive journalism experience under the direction of Alan Mittelstaedt, USC Annenberg School for Communication and Journalism professor and managing editor of Annenberg Digital News, publisher of Neon Tommy.

Through Summer@USC, a program sponsored by the USC Office of Continuing Education and Summer Programs, 17 high schoolers are experiencing firsthand the deadline-driven life of a Los Angeles journalist.

“The goal is to improve our writing and get some stories published on Neon Tommy … to get out there and talk to people, and face that some people are going to reject you,” said Alexa Palermo, a senior from New York.

Every day, students spend six hours in a classroom environment designed to mirror a professional newsroom, where they brainstorm story ideas, research current affairs and learn how to write news stories.

“I teach at all different levels, and what makes the high school level possibly the most rewarding is that I spend the most time with them,” said Mittelstaedt, who is teaching the course for the fifth year. “You see them every day, watch their development and monitor their work.” 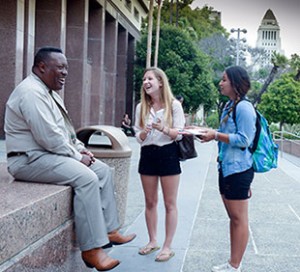 Mittelstaedt infuses a significant amount of field reporting and excursions into the class, giving students the opportunity to soak in the sounds, sights and culture of Los Angeles from a reporter’s perspective.

In their first week, the class traveled to Grand Park to conduct a series of man-on-the-street interviews on assigned and self-chosen topics — Mittelstaedt encouraged students to cover the George Zimmerman trial and Edward Snowden case.

“It was fun,” said Daniel Chaplik, a senior from Chicago. “It was nice to see how people reacted and just what people’s thoughts were.”

Palermo added: “I’d never done it before so I was really nervous going into it. The first person I talked to rejected me, but I just kept going up to a bunch of people and tried to get as much as I could.”

After talking with sources, students faced the challenge of turning their quotes into stories in less than a day’s time.

“I’ve worked [with] deadlines before, but not one-day deadlines,” said Tania Dawood of the Karachi Grammar School in Pakistan.

“It’s a little difficult,” she said, adding that she was up until the early hours of the morning perfecting her stories. “All the same, it’s a whole new experience, which is a lot of fun.”

According to Mittelstaedt, the assignments force students to confront and work around the challenges faced by professional journalists.

“I’d like to see them learn something here that they continue throughout their career,” he said. “I let them go out there and make mistakes, talk about the mistakes and then we go out and do it again.” 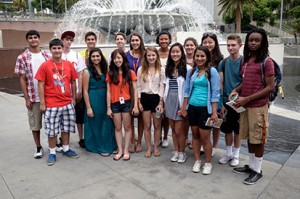 By the end of the program, students will have produced multiple stories on a chosen topic of interest, some of which will be published on Neon Tommy.

According to the students, taking the class has encouraged them to put USC at the top of their lists of dream colleges.

“I definitely want to do something in the media, and Los Angeles is the perfect place to be,” Chaplik said.

“This [class] has cemented my love for the campus and desire to come here because you get to live the experience,” Palermo added.

For Mittelstaedt, the course is an opportunity to teach young people to look beyond the traditional academic setting and use journalism as a tool to better understand the world.

“People come to this school and see there’s more potential beyond the walls and limitations of an academic program,” he said.

“I love journalism, and I love students who can see there’s some value in engaging with the world around them.”