Paul Ignatius ’42 did not originally set out for a Navy career. In his youth, he dreamed of a profession in the arts — acting, writing or directing films. So it must have been kismet when, sitting in the Doheny Memorial Library as an undergraduate in the late 1930s, he picked up The New York Times Magazine.

In it he found a first-person article by Dean Acheson who wrote about the challenges and rewards of public service. A statesman and lawyer who served in Franklin D. Roosevelt’s administration as under secretary of the Treasury, Acheson went on to serve as secretary of state. The piece — detailing the enormity of the problems and intellectual rigor Acheson’s job entailed — struck a chord in Ignatius.

“I said to myself, if I would ever have a chance I would like to do that,” Ignatius recalled.

The opportunity did arise.

After earning his bachelor’s degree in history from USC, Ignatius joined the Navy almost immediately. He had just begun an MBA program at Harvard University when he was commissioned as a naval officer. World War II was in full swing. 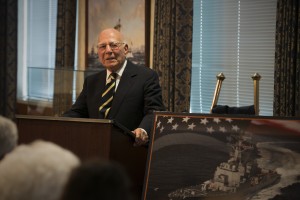 Former Secretary of the Navy Paul Ignatius speaks during the ship naming ceremony. A representation of the ship is pictured in the foreground. (Photo/Arif Patani)

In honor of his service, the Navy recently announced that an Arleigh Burke-class guided missile destroyer currently under construction will bear the name USS Paul Ignatius. The class is named in honor of Adm. Arleigh Burke, the most famous American destroyer officer of World War II and later chief of naval operations.

“The Ignatius will be in our fleet for three or four decades,” said Secretary of the Navy Ray Mabus at the June 11 celebration of the naming. “It will sail virtually every ocean of the world. It will be a reminder of the experience and the wisdom of Paul Ignatius.”

The ceremony was held at the Pentagon, where it was attended by Ignatius, his family, and current and former civilian and uniformed naval officials and guests. In addition to Ignatius, five former secretaries and acting secretaries of the Navy attended.

“I was quite surprised and really overwhelmed,” Ignatius said. I’m really grateful to the Navy and to Secretary Mabus.”

Arleigh Burke-class destroyers conduct a variety of operations, from peacetime presence and crisis management to sea control and power projection. They are capable of fighting air, surface and subsurface battles simultaneously and contain myriad offensive and defensive weapons designed to support maritime warfare.

Construction on the USS Paul Ignatius is under way at a shipyard in Mississippi. The missile destroyer will take approximately three to four years to build.

The 92-year-old native of Glendale, Calif., is familiar with the destroyer. In his time as a naval officer during World War II, Ignatius served aboard the aircraft carrier USS Manila Bay and worked with destroyers in his carrier group.

During that period Ignatius participated in the Battle of Leyte Gulf in the Philippines, which was considered the largest naval battle of World War II. He recalled some harrowing experiences, such as when a Japanese fleet attacked a group of aircraft carriers, including the Manila Bay.

“Two of the Japanese warships were the largest in the world in the time,” Ignatius said. “Several ships were sunk, including three destroyers. It was a long, hard slug.”

Later, in Lingayen Gulf, his ship was struck by two planes flown by kamikaze pilots — one plunged through the flight deck and exploded.

“We had a wonderful captain and we were able to put the fires out before they consumed the aviation gas and the ordnance,” Ignatius said.

Despite the destruction, the crew managed to save the ship, which operated for another few weeks before returning to stateside for repairs.

Following his government service, Ignatius became president of The Washington Post for two years and president of the Air Transport Association for 15 years. He has also authored two books: On Board: My Life in the Navy, Government, and Business (Naval Institute Press, 2006) and Now I Know in Part: Stories of My Growing Up (American Literary Press, 2000).

Currently living in Washington, D.C., with his wife, Nancy, Ignatius spends his time serving on the boards of charitable organizations that benefit disadvantaged youth. He occasionally visits USC to give lectures.

Ignatius credits his studies as an undergraduate at USC for igniting his interest in world history. In particular he was most inspired by a history survey course called “Man and Civilization” and another course on the works of William Shakespeare. English Professor Frank Baxter, who later hosted the Saturday morning show Shakespeare on TV, brought the poet’s plays to life, Ignatius said.

Good teachers are invaluable, he noted.

“Lifetime interests develop from the inspiration of fine teachers.”

A nonprofit started by recent USC grads gives back to anyone who is hurt while protesting against racial injustice.

The USC Viterbi alumna and founder of Kailey’s Queens organizes events for young women that foster friendship, learning and fun.

USC alum chronicles the history of — and threats to — affirmative action

A name with firepower