On a quiet hilltop in southern Rwanda is a panorama of captivating beauty: rolling hills, pastures, open sky and on the horizon, small farms and pastoral villages.

But the beauty is deceptive. This hilltop, the site of a former secondary school, bore witness to the slaughter of more than 50,000 Tutsis by Hutu militia over a two-day period in 1994. Men, women and children were buried in a mass grave.

The school buildings have since been transformed into the Murambi Genocide Memorial Center. The exhumed corpses of more than 800 victims, preserved with calcium carbonate, or lime, are displayed on wooden tables in classrooms that visitors pass through. Beneath the chalky whiteness of the lime, anguished facial expressions are visible. Open mouths cry out silently.

True to the memorial’s aims, visitors to this place will never forget the Rwandan Genocide.

“Murambi was definitely one of the hardest days, but also one of the most important in terms of really letting it in,” recalled Nora Snyder, a senior majoring this fall in international relations and Middle East studies. “Visiting a memorial is very emotional, but it’s something you absolutely cannot experience sitting in a classroom or looking at a book.”

Snyder was among 11 undergraduates from the USC Dornsife College of Letters, Arts and Sciences enrolled in the Problems Without Passports (PWP) course “Rebuilding Rwanda: Memory, Testimony and Living Together After Genocide” this summer. Developed with Vice Dean for Academic Programs Steve Lamy, USC Shoah Foundation: The Institute for Visual History and Education and USC Dornsife’s School of International Relations, the course was designed as an exploration in problem-based learning.

Amy Carnes, associate director of education at the USC Shoah Foundation, and co-instructor of the course, said the institute’s positive experience with PWP and its increasing engagement with testimony-based education in Rwanda inspired the trip.

“Having spent time there as a graduate student myself, I knew that there was great potential for life-changing educational experiences in Rwanda,” she said. “PWP was definitely the best framework through which to bring these experiences to the students.” 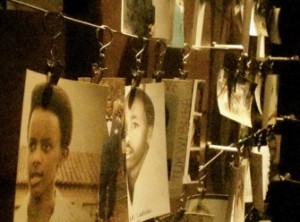 Prior to their departure, students undertook two weeks of intensive coursework at USC, which included research conducted in the USC Shoah Foundation’s Visual History Archive. Sixty-six new testimonies from Rwandan Genocide survivors were added to the archive in April thanks to the institute’s recent work with partners in Rwanda.

The group then spent two weeks in Rwanda, where they met with governmental representatives, several ambassadors, genocide survivors and representatives from NGOs, all of whom have an active stake in the day-to-day rebuilding of the country. The students also visited six of Rwanda’s seven national memorial sites.

Catalyzed by the assassination of Rwanda President Juvénal Habyarimana, a Hutu, his government implemented a systematic genocide of the Tutsi minority in April 1994. Over the next hundred days, 800,000 Tutsis and Hutu political moderates were systematically killed. The troubling vestiges of Belgian colonialism — its manufactured ethnic divisions and stark political hierarchies — were at the heart of the genocide.

“The Rwandan Genocide destroyed almost every aspect of the country’s political, social and economic infrastructure,” said Dan Leshem, associate director for research at the USC Shoah Foundation, who co-instructed the course with Carnes. “Since then Rwanda has made tremendous strides in rebuilding all these areas and thus presented a very interesting case study for a PWP course.

“Posing to students the question of how a country attempts to recover in the aftermath of genocide and asking them to choose an area of focus — the meaning of justice, economic recovery, the question of trauma — creates a compelling context in which students are asking the same questions Rwandan citizens ask every day,” he added.

Moreover, these students were alive at the time of the genocide, lending it a particularly vivid sense of immediacy and relevance to their lives.

Marissa Roy, a senior majoring in philosophy, politics and law, is passionate about international law. She chose to research the meaning and role of justice in a post-genocide society. Roy’s inquiries led her to an understanding of the ongoing need for restorative justice, which focuses on healing and rebuilding communities.

“After seeing all those bodies, how could you possibly believe in something like justice again? It seems so flimsy,” said Roy, reflecting on the experience of visiting the Murambi memorial. “And yet the Rwandans are managing it. It takes a lot of strength to be idealistic, to come back from that and make as much progress as they have.”

Throughout the trip, the travelers were accompanied by Yannick Tona, a 23-year-old Rwandan guide whom everyone in the group agreed was an indispensable friend. The USC students also met and had dinner with Rwandan students from a national organization for student survivors of genocide.

“I found it very impactful when we met with students our own age,” Snyder said. “As peers, you identify with them because you look at them and see yourself. And yet these are people who survived this horrible genocide. They were so nice, welcoming and funny. It’s hard to believe that people who have been through such tragedy can be so resilient and courageous and strong.

Nitya Ramanathan, a junior majoring in international relations with a human rights minor, was drawn to the course for personal and academic reasons. Her family is originally from Sri Lanka, a country that ended a civil war in 2009 and is still actively in the process of reconstruction.

“The summer before college, I got to go to Sri Lanka and spend a month working with orphaned children and war widows. The experience really sparked my passion, which is why this trip to Rwanda was so perfect for me. It was a unique opportunity to learn about how a country gets reconstructed after a crisis.

“I really want to go back to Sri Lanka and help rebuild, and I learned so much in Rwanda,” she continued. “I met so many people who are in human rights, the field in which I want to work, so that was amazing.”

Greg Irwin, who will be a senior international relations major with a minor in screenwriting, investigated the topic of genocide memorialization, coming to understand the critical role it plays filling in certain gaps in the educational system. He particularly enjoyed a meeting with the Rwandan minister of education.

“School teachers can risk arrest for teaching genocide material the wrong way, so many of them feel they don’t know how to approach it or are reluctant to teach it at all,” Irwin explained. “Because of this, memorials become even more important as vehicles for imparting history and sensitivity to new generations.”

Indeed, a new generation is already coming up in Rwanda, one without direct memory of the genocide. Some of the country’s younger citizens have been sheltered from it — in fact, the terms ‘Hutu’ and ‘Tutsi’ are now illegal in Rwanda. These ethnic distinctions were largely delineated and imposed by Belgian colonialists, and understandably the country’s experience makes it wary of the potential dangers of drawing such ethnic divisions. Now the prevailing cultural and educational narrative is that they were all Rwandans before colonialism and the genocide and can be united as a people once again.

One important aspect of post-genocide reconstruction is the cultivation of cultural life, and the students were eager to experience this. They saw a joyful, interactive performance by Mashirika, a leading Rwandan dance troupe, in addition to the all-female drumming group Ingoma Nshya — indications that life is flourishing in Rwanda in the wake of so much destruction.

At the end of each day, students came together to discuss their experiences. Leshem was impressed by their emotional openness — for example, talking about how hard a certain day or experience had been. Now back in the United States, the students have continued to process the magnitude of their trip.

“The thing about genocide is that you definitely see the worst in people, but you also see the best,” Ramanathan said. “It’s completely unbelievable, but looking at Rwanda’s experience of rebuilding, there’s this sense that you can move past this tragedy, there is an ‘after.’ For me, the takeaway from this trip is a message of hope.”

Expanding global access to testimonies of the Holocaust and other genocides

With Wedlock of the Gods, professor brings Nigerian storytelling and culture to USC’s main stage

The production, which featured a nearly all-Black cast of students from the USC School of Dramatic Arts, celebrated the work of playwright Zulu Sofola.