The USC Marshall School of Business chapter of Net Impact (MNI) has been awarded gold standing. The status, which is based on performance in the 2012-13 academic year, is given to the chapters that perform in the top 20 percent of the Net Impact network.

To garner gold status, MNI hosted a broad spectrum of events, ranging from roundtable discussions and career panels to recruiting nights, which featured some of the top social impact organizations in the Los Angeles area. 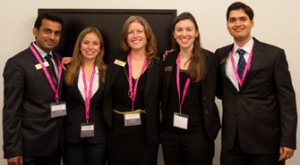 Fall and spring Industry Nights showcased recruiters from companies such as Disney, Bank of America, GameDesk and EcoMedia. MNI’s career panels on sustainable foods, women in social entrepreneurship and corporate social responsibility were also popular among members. In addition, the organization hosted senior executives in corporate social responsibility from Deloitte and Patagonia in roundtable discussions.

The gold status has influenced MNI’s strategy for the upcoming academic year as the organization hopes to increase collaboration with other clubs on campus.

“We plan to create a roadmap to better connect all of the social impact opportunities on campus, including Net Impact, the Society and Business Lab and the Marshall Global Impact Consulting club,” said MNI’s incoming President Stephanie Schwartz, who has background in nonprofit management and strategy consulting.

Schwartz also plans to stress the importance of social responsibility in any business career.

“Students make an impact no matter what career they choose to pursue,” she said. “Our focus is to bring Net Impact values and methodologies to not just the nonprofit and social enterprise sectors, but the corporate sector in a variety of industries as well.”

This is the second year in a row that a Trojan has received the top award in engineering education.