A million tiny fruit flies live in the laboratory of Sergey Nuzhdin, professor of biological sciences at the USC Dornsife College of Letters, Arts and Sciences.

The flies are not (thankfully) buzzing around the room but safely contained in small glass vials — thousands of them.

Nuzhdin and his team refer to this room as “The Flybrary.” It provides the raw material for their experiments using flies as models to study genomic analysis of social behavior.

“Through our research we aim to understand the genetic basis of complex behaviors such as courtship, group formation, aggression and learning in Drosophila melanogaster, otherwise known as the fruit fly,” Nuzhdin said. “We are particularly interested in understanding the evolutionary and developmental consequences of interactions between an individual’s genes and his or her environment, focusing primarily on the social environment.”

Working closely with Paul Marjoram, associate professor of research in preventive medicine at the Keck School of Medicine of USC, Nuzhdin is a staunch advocate of increasing cross-departmental collaboration between USC Dornsife and researchers on the Health Sciences Campus.

Thanks to a Research Collaboration Fund award from the USC Office of Research Advancement led by Randolph Hall, vice president of research, Nuzhdin and Marjoram have received grants totaling $4.2 million to study the social behavior of flies as a model for complex behavior in humans. Major support came in two recent grants from the National Science Foundation and the National Institutes of Health, aided by the National Institute of Mental Health.

Nuzhdin, Marjoram and their social behavior team use a variety of methodologies, ranging from traditional observation to high-throughput sequencing and automated tracking. Given that the fruit flies are so tiny, the researchers mark them with different colored dots to indentify them and track their behavior.

Through the lens of a powerful microscope, senior postdoctoral researcher Julia Saltz observed a group of fruit flies interacting on a mixture of sugar, agar and dead yeast, which replicates their natural diet of rotting fruit.

Several male flies waited for females to arrive to lay their eggs. As soon as a female landed, two males approached. One of them appeared to temporarily forget the female as he switched directions to head off his rival. The males reared up on their hind legs and tussled, before the loser scurried away. The victor then turned his attention back to the female. Apparently unimpressed with this display of male virility, she turned her back on him before flying away.

“We’re trying to see if the mating behavior of different genotypes varies,” said Brad Foley, a senior research associate in Nuzhdin’s lab. “We know that some males are more aggressive than others and that females have different preferences. We are trying to understand the social context of those preferences.”

Researchers use fruit flies because they can create genotypes — cloned groups developed by inbreeding. This allows scientists to study their behavior in a way that, for obvious reasons, is not possible with human subjects.

“The beautiful thing about flies is that you can create an infinite number of identical twins,” Saltz said. “You can take individuals that are exactly the same age and reared under identical conditions and then subject them to whatever social environment you want and measure the effects. And you can do that in a replicated way by using genotypes, so you can analyze the results statistically.”

Marjoram and Foley are developing computer technology to track and annotate behavior and interactions between flies.

“This will enable us to note coordinates through time and record, for example, that this fly had 10 meetings, five fights and mated three times over a certain time period,” Marjoram explained.

The male fruit flies are bred in the lab to be genetically more or less aggressive. Nuzhdin’s team hopes that computer tracking will help them unlock the secrets of fly courtship and determine how less aggressive males are still successful in courting females.

Their research provided proof for the first time that this grouping according to social preference, known as social niche construction (SNC), has a genetic basis.

“We found that genetic variation in aggressiveness actually shaped group sizes with consequences for mating,” Saltz said. “What was surprising was that we found it wasn’t that aggressive males were more successful at mating as was previously thought, but that either aggressive or nonaggressive males could do well depending on the social environment they created.”

Nonaggressive genotypes should not be considered “broken males,” Saltz said, pointing out that the flies were pursuing “an alternate social strategy,” which brought them mating success.

“It might be that the less aggressive males are successful because they don’t spend so much time fighting, so they have more energy left for courting,” Foley said. “And some males are just much more attractive than others because of their pheromones, so perhaps they don’t mind being around a lot of other males because they know they will be successful, whereas the ugly males have to fight it out.”

The team is also examining emergent properties in social systems, in which they create mixed societies using different genotypes by forcing aggressive and nonaggressive males to go into their preferred and nonpreferred group size and observe how they function.

“We want to ask, is it just the sum of the parts or is there some sort of more complicated dynamic that occurs?” said Marjoram, who has been the primary investigator on two collaborative grants in Nuzhdin’s lab.

“We already know that more aggressive males form groups with fewer males in them,” Foley added. “So we are going to see how that scales up when we mix more complicated groups together.”

She also found the flies’ past experience influenced how they reacted to new individuals.

“The males’ experience in their preferred or unpreferred group affected their next experience with a new male and also affected the new male’s behavior towards them,” she said. “So things about a fly [that] have been shaped by its previous experience influence how it interacts with new individuals.”

Foley translated this into human terms by giving the example of someone who was constantly rejected in high school, who thus tends to be shier and more socially awkward in the outside world.

The team also researches how genetics plays a role in deciding whether to stay or to leave social groups.

“For example, I might pay more attention to negative stimuli, whereas you might be more influenced by positive stimuli,” Foley said. “We are trying to find out the role genetics plays in determining whether to join or leave social groups and what processes in the brain could explain that.”

“If you allow flies to make their own decisions about which group to join, then you get different patterns of mating success than if you force them to interact,” Saltz said. “What we found is that both aggressive and nonaggressive genotypes could be successful at mating as long as their level of aggression generated the group size [that] is best for them. So that was exciting because one of the biggest questions of population genetics is understanding why there is so much variation in human behavior.” 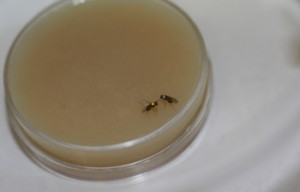 The team’s research shows how genetic variation is maintained in populations by comparable processes, which allow different genotypes to be equally successful. It also helps us understand how interaction between our genetic makeup and the social environment determines our behavior.

Research in humans has shown that genotypes influence friendship choices, a process that has been implicated in the development of substance abuse.

“For example, in humans we can see that adolescents who are genetically predisposed to use alcohol and substances tend to hang out with similar individuals,” Saltz said. “The question is: Should we try to stop kids at higher risk associating from these kinds of peers, or is that just a symptom and not a cause of the problem?”

By observing the behavior of flies, Nuzhdin and his team hope to find answers to those questions.

Nuzhdin paid tribute to Saltz and Foley, the senior post docs he co-appointed with Marjoram.

“Our research has derived from five years of joint work with Julia and Brad who have absolutely been equal partners in formulating and developing our joint research program and in making our applications competitive,” Nuzhdin said.

Saltz and Foley’s research has been recognized with an article in Science Daily, while a research paper they authored was named Best Student Paper by The American Naturalist. Saltz is also the recipient of the W.C. Allee Award from the Animal Behavior Society.

Nuzhdin also noted his team’s collaboration with USC Dornsife’s Simon Tavaré, holder of the George and Louise Kawamoto Chair in Biological Sciences and professor of biological sciences, and his group. They include Reza Ardekani, who recently earned his PhD in computational biology and bioinformatics, former research assistant Anurag Biyani and PhD student Mohammad Abbasi Dezfouli.

“The software marks the position of each fly with numbers and alerts us when flies interact by putting a red square between them,” Nuzhdin said. “Their software can also tell us when the flies are engaged in courtship. Mohammad is extending this work to make automatic tracking of more behaviors possible. And Reza — our computer vision guru — is thinking about making the tracking devices commercially available to any Drosophila researcher. This has been a great lesson for us on how technology can aid social mathematics.”

Back in The Flybrary, a particularly aggressive male was so busy chasing several rivals around the petri dish that he left the female unattended. A less aggressive male spotted his opportunity and successfully approached her, beginning a slow courtship dance by vibrating his legs on her head.

Using the system of colored dots, Saltz tracks and records the behavior of the tiny fruit flies. However, Saltz says that after staring at them in the lab for five years, they don’t look so small to her anymore.

The secret life of fruit flies