For Lizette Salas ’11, it’s all about the follow through.

After graduating from the USC Dornsife College of Letters, Arts and Sciences, Salas became a professional golfer, competing on the Symetra Tour in seven tournaments. She then played in the U.S. Women’s Open, tying for 15th place.

Participating in the 2011 Ladies’ Professional Golf Association (LPGA) Qualifying School, Salas finished 20th and earned full status on the LPGA tour for 2012. She climbed from No. 240 in the world to No. 89 over the course of the season, finishing as the 51st biggest earner on tour. She was one of 11 Trojans on the 2012 LPGA tour, the most players from any university.

“That says so much about the program and about Coach Andrea,” she said, referring to USC women’s golf head coach Andrea Gaston, then in her 17th year with the Trojans.

Fast forward to the present as Salas has skyrocketed to No. 18 in the world. During this year’s LPGA tour currently taking place around the globe, Salas has become a rising star. On June 28, going into weekend play at the U.S. Women’s Open in New York, she finished the day tied for third, only five strokes off the lead. 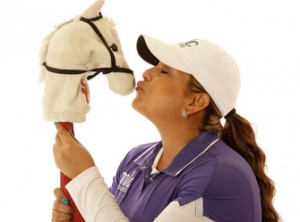 Lizette Salas shows her affection to her alma mater by giving a peck to a replica of the Trojan mascot white horse Traveler. (Photo/Ezra Shaw/Getty Images)

The youngest of three children born to Mexican immigrants and raised in Azusa, Calif., Salas’ close-knit family was cheering her on during the Kraft Nabisco Championship tournament in April.

Her family and friends were not the only ones on the sidelines wearing gold T-shirts emblazed with cardinal letters spelling out: “Fight On Lizette!” People she didn’t know, her fans, perhaps Trojans themselves, also sported USC T-shirts and shouted her name.

“In the Kraft Nabisco tournaments, the winner gets to jump in the pond,” Salas told the LPGA, reflecting on her year. “That’s always been my dream, to jump in that pond. Being from Southern California and having those fans wearing those gold shirts and cheering me on, I definitely felt I had the most fans out there. You can’t ask for more at a major championship game.”

She’s grown in the past year, Salas said.

“I think I’m a different player,” she told the LPGA. “Just starting out overseas, in Australia, Thailand, Singapore, I started feeling really strong. I finished second in Hawaii. I’m just feeling more comfortable in my own skin. I feel like my game is really coming together.”

In April, her family, friends and fans followed her to Honolulu for the Lotte Championship. There, they donned the “Fight On Lizette!” T-shirts and made some noise in her honor.

“I was in the zone,” Salas said. “I wanted to fight out there. I know that I can win and I’m so close. I’ve been so blessed to have coaches and agents and family who believe in me. They’ve given me so much support.

“I just have to trust in my game,” she continued. “Believing I can do it and trusting I can do it, that’s the last step for me to get my first win.”

No overnight success, she’s worked hard for many years to reach this point.

Salas was 7 when her father showed her a proper golf swing. Being head mechanic at the public Azusa Greens Golf Course had some perks, and Ramon Salas made sure his children learned to play. But Salas, his youngest, was special. One day, head pro Jerry Herrera offered to coach her. Unable to pay for lessons, her father bartered his services as a handyman.

Soon she was unwelcome at her dad’s friendly Thursday game with the rest of the grounds crew.

“When I started taking their money, they didn’t let me play anymore,” recalled Salas, who would go on to win the national championship as a USC freshman, captain the team her senior year and become a four-time All-American — the first in Trojan golf history.

After the 2012 LPGA tour, her meteoric rise made news. She’s been featured in media from The New York Times to ESPN, not just because she’s a terrific young golfer but because of her inspirational story. The first in her family to attend college, Salas speaks lovingly of a father who was “my caddie, my chauffeur, my coach, my everything” and a mother who was “big on education and kept my head in the books.”

“Where I come from,” she told the large Galen Center crowd, “people don’t expect much of a person — especially a young Latina. There were countless times I was told that I wasn’t going to make it.”

Salas teared up when she mentioned setting an example for her niece and two nephews.

“They are the most precious things ever. They are my biggest motivation,” she said. “My goal was to show them that anything is possible: You just have to work for it. That’s a big role, to have three little kids look up to you.”

All three, who have accompanied their aunt on tournaments, now play golf. Salas also trains and mentors some 80 other youngsters through San Gabriel Junior Golf, a group founded by her father and Herrera, the Azusa Greens golf pro.

Asked how learning golf benefits low-income children, Salas responded with passion: “Golf teaches so much. It teaches discipline, concentration, proper etiquette. You have to be quiet; you have to shake a player’s hand after you’re done; boys have to take off their hats; everything has to be neat and tucked in. It motivates them, too, and gives them self-confidence.”

The Southern California native who came to USC Dornsife on a golf scholarship and majored in sociology is no less passionate about her alma mater.

“If it wasn’t for USC, if it wasn’t for my Trojan Family, I wouldn’t be on tour today and living my dream,” she said. “It’s just a great place to learn and grow.”

COMMENCEMENT 2022: For the USC master’s graduate, coming in last place at the Olympics is not a failure, but a point of pride.

Lauren Cole, Isabella Dake and Anastasia Zavodnick mentor their own interns and turn to the USC School of Dramatic Arts’ Professional Development Center and the Trojan Family to hire students.

In the swing of things