Baseball fans not only enjoyed the Padres-Dodgers game played on June 22 in San Diego, but they also shared in showing appreciation for local military members and the hundreds of school principals, teachers, superintendents, military school liaison officers, universities and social workers serving military children and families.

NASW recognized the Building Capacity Consortium, which includes the Hamovitch Center for Science in the Human Services at the School of Social Work, as an honorary community-wide partnership during a VIP gathering prior to the game and during an on-field ceremony. The awards ceremony was led by Tera Stefani, who earned her Master of Social Work (MSW) degree from USC as part of Building Capacity, which is supported by a grant from the U.S. Department of Defense Education Activity (DoDEA).

In their comments, Stefani and Janlee Wong, executive director of the NASW California chapter, highlighted the more than 70,000 hours the Building Capacity Consortium has given to military children and families through internships, tutoring services and other supportive programs. Shirley Gentilini, president of the state chapter, also participated in presenting the awards.

“I know that you are needed now more than ever,” Davis, a trained social worker and a former school board member, told the educators, social workers, military school liaison workers and others gathered at the pregame awards ceremony. “You are the safety net for millions of families across the country.” 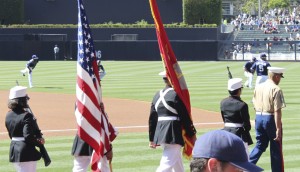 The flag is presented by the Junior ROTC Color Guard from Oceanside High School, one of the DoDEA consortium schools, before the Padres-Dodgers game in San Diego.

Those being honored, along with the community and military partners, were invited and then escorted to the field where they stood along the first base line as the flag was presented by the Junior ROTC Color Guard from Oceanside High School, one of the DoDEA consortium schools.

Meanwhile, other Building Capacity team members worked at an information kiosk inside one of the main gates, which Diana Pineda, Building Capacity’s San Diego field manager, helped to organize. The team presented information on the School of Social Work’s MSW program, displayed the consortium’s four guidebooks for parents and educators and answered questions about the partnership’s work in the schools. 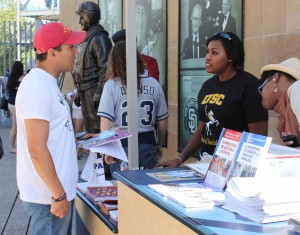 Carissa Story, whose children attend Mary Fay Pendleton School in the Fallbrook Union Elementary School District, said she appreciates the teachers’ sensitivity to her children’s individual needs. Her daughter, for example, is strong in math, so the teachers have given her additional support and materials for higher grade levels to keep her progressing.

“They understand that being military, the children have different emotional needs, as well as educational needs,” Story said. “They help you not only if you’re struggling but also to succeed.”

Charles Stafford found a brotherhood in the U.S. Marines, but also a major interruption to his sobriety. Today, the USC social work graduate is helping others find their way to recovery.

The Trauma Recovery Center at the USC Suzanne-Dworak-Peck School of Social Work is the first comprehensive victim recovery behavioral health clinic at the university.