While many of his classmates head out to get a cup of coffee and socialize after an evening journalism course, Najeeb Hasan has a different agenda. If he can make it home fast enough, he’ll be able to tuck in his three children and get in a reading of Good Night Moon.

Hasan came to USC because the USC Annenberg School for Communication and Journalism’s specialized journalism program gave him the opportunity to work on a long-form project with experienced editors and to take classes in USC’s School of Religion.

“My wife and I decided we are at that stage in our lives where we could say, ‘Let’s just take that one year and try to make it happen,’ ” said Hasan, who previously worked as a staff writer for the Metro Silicon Valley Newspaper and as an editor in the nonprofit field.

For Amanda Jensen, a graduate student in molecular biology, the challenge of juggling parenting and academics came three years into her doctoral studies at the USC Dornsife College of Letters, Arts and Sciences when she had her son, Anders.

She initially found it challenging to “get back into the research mindset” after being home for three months, but the support of her colleagues who recently had babies helped.

“Because of the way our program fosters inter-lab relationships, no one felt awkward talking to one another about our upcoming family additions,” she said.

Now, before she dons her lab coat each day to conduct experiments, she purees peas and chicken for her 10-month-old son before taking him to daycare and jumping on the train to campus. What eases the transition is the family-like atmosphere she finds in her program at the lab.

“What I love about my program is that we behave as a unit. We talk to each other in the halls, eat lunch together and attend tailgates at USC home football games,” said Jensen, who lives in Culver City, Calif., with her husband and son. “It makes for a really great working environment.” 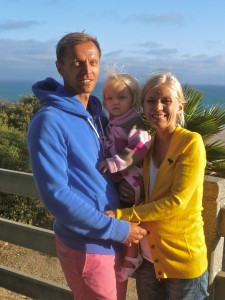 Helena Liikanen-Renger, a journalist from Finland who earned a scholarship to USC Annenberg’s specialized journalism program in 2011, also found her career plans impacted by motherhood. In October of that year, she had her daughter, Taimi. The following July, she, her husband and daughter moved to Santa Monica for the yearlong program.

“The journalism field is changing so much. When I saw this opportunity, I thought this sounds like a great idea. See the world. Open your mind,” said Liikanen-Renger, who had been working as a journalist for 15 years in Finland. “My husband was very keen on trying something new. He took a year off from everything and decided this was a good opportunity to be a stay-at-home dad. Otherwise it wouldn’t have been possible.

“In Finland, we have very long maternity leaves, so I had been at home 24-7 with my daughter until we came here. This program started out with a boot camp, which was two-and-a-half weeks of 9 a.m. to 6:30 p.m.,” she continued. “It was mentally hard to be away from my daughter, but I realized she and my husband are doing so well at home. And now she is a complete daddy’s girl.”

For the student-parents, the key to managing their hectic lives is time management.

“My life has been very scheduled, and that was the only way it was able to work,” Hasan said. “And obviously, my wife was inordinately patient.”

Liikanen-Renger noted she has been “very strict with my timetables.”

“On Tuesdays, I would come to campus early, even though I didn’t have class until 6, so I could get my work done,” she said. “The mornings I spent with my daughter.”

Hasan and his wife also made a big adjustment when they decided to move from the Bay Area to Pasadena, Calif., so he could go through the one-year program and “add some depth” to his reporting.

His wife’s support has been crucial.

“When the program started, our baby was basically a newborn,” he said. “My wife is a midwife and had a practice in the Bay Area. She shut that down about a month or two before the baby was born and extended that leave.”

Liikanen-Renger echoed the importance of her spouse’s backing.

“My husband has been so amazing,” she said. “I come home from school, and he has often prepared dinner.”

Jensen appreciates that her husband, Heath, a USC alumnus who works full-time, watches their son whenever she has to come to campus to run an experiment. Once she earns her doctorate, she would like to combine teaching with motherhood.

Hasan is working to finish his thesis project, then plans to freelance with his acquired skillset.

Liikanen-Renger’s immediate future includes sightseeing in California before returning to Europe with her family, which will welcome a new addition in November. She plans to return to work with her new set of skills.

“My aim with this program was to become a video journalist,” she said. “Journalists should know as much as possible, which is something I have definitely learned.”