A squeamish person would blanch at the prospect of dealing with such daunting topics. Not so, however, for the area residents, students and staff members who turned out this month for two training workshops as members of the first USC Neighbors Emergency Team.

“We have trained such teams on campus, but we want to start extending safety out to our neighborhood since [its members] are a major partner for USC,” said Bill Regensburger, director of Fire Safety and Emergency Planning, part of USC’s Career and Protective Services (CAPS). “We want to help ensure their safety as well.”

Armed with strips of gauze and cardboard splints at the first workshop on June 12, the volunteers listened to USC Fire representatives and then efficiently went about the business of practicing first aid in the community hall next to the USC Caruso Catholic Center. The second workshop held on June 19 dealt with fire suppression.

Regensburger, who was joined at both workshops by specialists in emergency planning, introduced David Tool MA ’77 PhD ’85 as the person who would “help us bring the neighborhood and students together.” 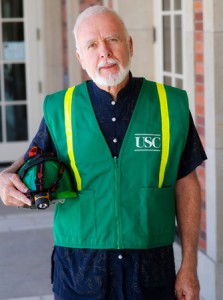 David Tool served as the catalyst for the emergency team. (USC Photo/Dietmar Quistorf)

Tool, 71, a former USC lecturer and staff member, has lived in the University Park neighborhood with his wife for 43 years. He first thought about doing something to help the community last summer after seeing a fire and safety briefing being delivered to students outside a dormitory on 29th Street.

“And I thought this is good information,” he said. “We should try to get this out to all the people [in the community]. We all live in this area and are part of the USC family and so we want to take care of each other.”

The training, he pointed out, will enable residents to take care of themselves and look out for others, including the students who live near the campus.

“We are very committed to this neighborhood,” Tool said. And through the emergency program, he added, “we’ll be able to help our neighbors in this particular area. I think it’s a great thing.”

As for the first half of the emergency training at the Caruso Center, Tool said, “what they’re teaching is the most essential stuff — how to deal with people who are injured.”

In the event of an emergency in the community, he noted, “we are the first responders.” The key, he added, is that “we’re learning how to save lives. That is what’s important.”

“The training for our neighbors — a great group — turned out better than I could have hoped,” Regensburger said following the first session. “David Tool and his wife are doing good things in our neighborhood.

“In terms of ensuring the safety of our neighbors, in the event of an emergency, it is extremely useful to have a group of trained volunteers out there,” he continued. “While we can’t hope to train everyone, even a small group, such as this team, will make a real difference in an emergency.”

Corinne Montana ’11, a Master of Planning graduate student at the USC Price School of Public Policy, considered the workshops to be a valuable experience.

“The information was practical and relevant,” she said. “The format of the workshop was engaging and … the training provided tips and tools for disaster preparedness that I could implement right away.

“I also enjoyed interacting with University Park neighbors. I think continued training, dialogue and programming could provide even greater benefits to the community,” Montana added.

Angella Gaines, a nearby resident and teacher at the USC School for Early Childhood Education, agreed: “The training was very helpful for myself and my family, as well as the community.”

Gaines came to California from Michigan, where she had to deal with tornadoes instead of earthquakes.

“Totally different,” she said with a laugh.

During the first workshop, Steve Goldfarb, a fire safety and emergency planning specialist with CAPS, pinpointed three disaster phases in the event of an earthquake: preparedness, response and recovery. He also covered the familiar mantra of “drop, cover and hold on” — the three things everyone should do the next time Southern California is rocked by a temblor.

“Recovery does come,” he told attendees, though it may “take a long time.”

The overall aim, he added, is community self-help, as evidenced by this year’s Boston Marathon attacks in which selfless Bostonians stepped forward to help hundreds who were severely injured by two bomb blasts.

“Without the volunteers,” he said, “they never would have made it.”

Through Kicks for Kids, Trojans give children with disabilities an afternoon of fun

The USC students also get something out of it: relationships with youngsters that grow as the year progresses. “I don’t think they realize how much of a difference it makes for me, too,” says one volunteer.