While a large percentage of adults say they monitor the activity of children in their households on social networking sites such as Facebook, almost 30 percent do not, according to results of the 11th annual study of the impact of the Internet on Americans by the USC Annenberg School for Communication and Journalism’s Center for the Digital Future.

“It’s every parent’s dilemma to know when to trust their children,” said Jeffrey Cole, director of the center and research professor at USC Annenberg. “In the last five years, we have seen many new issues about parenting and technology evolve that previous generations never encountered. How parents cope with their children using social media like Facebook represents only one aspect of these issues.”

The study found that although 70 percent of adults said they monitor the activity of the children in their households while on social networking sites, only 46 percent have password access to the children’s accounts.

The findings also showed that of the adults who do not monitor the social networking activity of the children in their households, 40 percent cite trust as the explanation: Either they trust their children or they believe that monitoring online behavior would show lack of trust. According to the study, 9 percent of adults don’t monitor their children on Facebook because they don’t know how to use the social networking site, and 7 percent don’t because “they don’t have time to do it.” 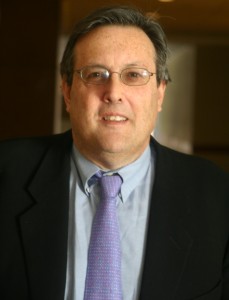 Jeffrey Cole, director of the Center for the Digital Future at USC Annenberg

The responses about parent supervision of children on Facebook are among the more than 180 issues explored in the 2013 Digital Future Project, the longest continuing study of its kind and the first to develop a longitudinal survey of the views and behavior of Internet users and nonusers.

Conducted in conjunction with Bovitz Inc., the current study includes new questions that explore negative online attention, such as bullying, harassment and unwanted sexual attention, as well as a closer examination of the “millennial rift” — the vast differences between how millennials (ages 18 to 34) and nonmillennials use and perceive online sites and services.

The survey found that millennials, when compared to nonmillennials, have different views about using the Internet and report significant differences in many aspects of their behavior online.

More than twice as many millennials as nonmillennials watch online versions of television shows or music videos.In addition, 70 percent of millennials, compared to 51 percent of nonmillennials, value social networking sites such as Facebook, Twitter and Google Plus as important for maintaining their relationships.

The 2013 report also explored a variety of new issues involving online buying, including purchasing on mobile devices and the impact of sales tax on Internet buying.

Problems that cross all age groups

The Digital Future project also explored the darker side of Internet use by asking new questions about online bullying, harassment and unwanted online sexual attention.

Although bullying and harassment of young Internet users has dominated media coverage of this problem, the survey found that measureable percentages of users in all age ranges report that they’ve been bullied or harassed. The largest of these groups was users under 18; 18 percent of them reported being bullied or harassed.

While more than one-third of users under 18 reported receiving unwanted sexual attention online, significant percentages of users in all age categories reported it as well.

The USC-led study of more than 2,400 Facebook users suggests that platforms — more than individual users — have a larger role to play in stopping the spread of misinformation online.

Professors who host their own podcasts share their “must-listen” list for 2023 — seven podcasts with subjects including history, music and one of America’s most notorious madams.