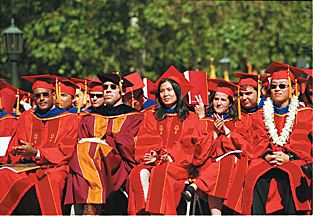 At a time when USC is marking a decade of dramatic progress, on Friday, May 11, the Class of 2001 will look back on four years of unprecedented academic achievement.

While two giant-screen Jumbotrons show the 15-minute video “Decade of Distinction: A University for the 21st Century” – produced and directed by recent alumnus D.J. Johnson, and starring USC – more than 8,000 candidates for graduation will file into Alumni Memorial Park for USC’s 118th commencement exercises.

Most of the 4,231 bachelor’s recipients started at USC in fall 1997, a watershed year marked by new core requirements and a strengthened commitment to undergraduate education. During their four years, they have seen USC win accolades as “College of the Year” and become one of 16 national Leadership Institutions; individually, they have racked up dozens of prestigious fellowships and scholarships. Nineteen of these graduates were awarded USC’s $10,000 Renaissance Scholar Prize for the breadth of their studies.

Along with 3,126 master’s and 1,100 doctoral candidates – and 25,000 friends, faculty and family members – they will hear Barry Munitz, CEO of the J. Paul Getty Trust, deliver the main commencement address and receive an honorary degree.

The processional march into Alumni Park will begin at 8:30 a.m., followed by the commencement ceremony at 9 a.m. Giant-screen TVs will give crowds in back a better view of the speakers’ platform in front of Doheny Memorial Library.

Valedictorian Paritosh Prasad, graduating with a double major in psychobiology and political science, will also speak at the ceremony.

Speakers at the individual schools’ satellite ceremonies following the main ceremony include outgoing Los Angeles Mayor Richard Riordan, who will address the USC Rossier School of Education graduates, and one of two candidates vying to replace him – former Assembly Speaker Antonio Villaraigosa, who will speak at the social work ceremony.

Commencement will have a somber note this year, coming a few days after the campus memorial service for Joseph P. Allen, USC’s dean of admissions and financial aid and vice provost for enrollment.

&Mac253;We will miss Joe Allen,” said University Marshal John Callaghan, who is in his customary role directing commencement. “It is somehow appropriate that his memorial service will be held on the Monday at the start of Commencement Week, and the reception afterward will be in the large tent on Pardee Way, which will host a number of graduation events. So many of the graduating students were recruited by Joe,” he said.

For the second year, two full days of pre-commencement events are scheduled, from the Phi Kappa Phi Awards at 2 p.m. Wednesday, May 9, to the separate African-American and Chicano ceremonies at 8 p.m. Thursday. The Graduate School Doctoral Hooding Ceremony, at 9:30 a.m. Thursday, will be the largest of the six doctoral hooding ceremonies to be held on Thursday and Friday.

New this year is the “Trojan Last Chance Dance” from 7 p.m. to midnight Wednesday on Pardee Way for all graduating students and their guests. (Graduates can RSVP for the dance at the commencement Web site; see box at end.)

Catherine T. Gray, associate director of Academic Events, expects 700 to 800 graduates and guests to show up for the free dance.

For the first time the senior and graduate student award ceremonies will be combined, at 1 p.m. Thursday in Bovard Auditorium.