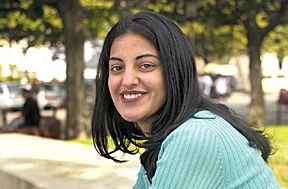 Salutatorian Neelu Arora said her most memorable class at USC was a course in classical mythology.

Come fall, Neelu Arora, salutatorian for the USC Class of 2001, will be wearing a Trojan T-shirt under UCLA Bruin sweats.

Close to her heart.

“USC holds a pure and special meaning for me,” she said. “It meant so much for me to be able to explore on my own, to have a strong say in my own learning at USC. The diverse general education requirements, flexibility in coursework and support from multiple advisers allowed me to accomplish all my goals.”

However, the prize-winning Renaissance Scholar, who is graduating with a cumulative 4.0 GPA, plans to attend the UCLA School of Medicine, where she hopes to earn a joint degree — a medical degree with either an MBA or a law degree.

At commencement, Arora will graduate with a double major, receiving a B.A. in biological sciences and a B.A. in social sciences with an emphasis in economics.

“Social sciences taught me a lot about people. Psychology gave me a perspective on how to interact with people in medicine,” said Arora. “Dr. Arnold Dunn’s course on the history of biology showed me the impact of politics, society, economics and religion on medicine and science. For example, autopsies were not legal during some of the Middle Ages. Real anatomy started in the arts.”

Arora said her most memorable class at USC was a course in classical mythology. While taking that class in spring 1999, she was also teaching mythology to fifth graders at St. Vincent’s Elementary School as a volunteer in the Joint Educational Project.

“These were amazing kids who were studying for a national mythology contest. Some of them knew more than we did, and they taught us a lot,” she said. Arora also volunteered with Trojan Life Cuddlers at LAC/USC Women and Children’s Hospital.

“That program recognizes the importance of human touch,” she said. “We helped the nurses take care of babies, feeding them and holding them. A lot of them didn’t have much contact with their natural mothers because the mothers were addicted to drugs or otherwise incapable of taking care of the infants on their own.”

“People might wake you up at 2 or 3 in the morning because they don’t know where their roommate is, or girls ask you what dress to wear or how to do their hair,” she said. “Sometimes it’s painful because you know someone has a problem, and they won’t open up.”

A Southern California native from Diamond Bar, Arora spent most of the first year of her life in the Punjab area of India, her parents’ original home. Fluent in Hindi (and French, with some Spanish), she helped a close friend start the Hindu student organization, which promotes awareness of Hinduism and celebrates Hindu traditions and holidays. She was also an officer in the Southern California Indo-Americans, a cultural and social club.

She is a USC Trustee Scholar and a member of the honor societies Phi Beta Kappa, Phi Kappa Phi, Alpha Lambda Delta, Alpha Epsilon Delta and Golden Key. She has been on the Dean’s List all of her semesters at USC and is the winner of the Emma Josephine Bradley Bovard Award for the highest undergraduate grade-point average by a woman.

“I can’t emphasize enough how much my family, my friends, my professors and my advisers have meant to me,” she said. “I really don’t feel like I’ve done anything special. I’ve just been amazed, touched and inspired by all of my fellow Trojans.”

Salutatorian Neelu Arora: A Trojan T-shirt Under Her Bruin Sweats