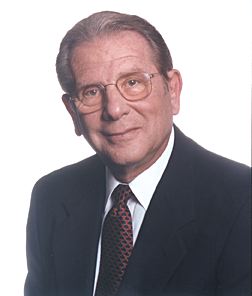 At a time when most of his contemporaries have retired or at least slowed down, why is 75-year-old Alfred E. Mann working 80 to 100 hours a week?

“I’m not done yet,” said Mann. The one-man biomedical conglomerate wants to help the blind see, the deaf hear and the lame walk. He’s trying to cure cancer and diabetes, and he’s in a hurry.

But on May 11, he will pause long enough to let USC confer on him an honorary doctor of humane letters degree. Mann, a former USC trustee who in 1998 donated $112.5 million to establish the Alfred E. Mann Institute for Biomedical Engineering, was at a momentary loss for words to express his feelings.

“This is very rewarding, and I am honored and grateful. These are my first honorary degrees,” said Mann, who will also receive an honorary degree this spring from The Johns Hopkins University in Baltimore.

A Portland native, Mann began his business career at age 5 with a lemonade stand. He eventually earned bachelor’s and master’s degrees from UCLA, in physics. In 1956, at age 30, he started his first company, an aerospace firm called Spectrolab. He credits his study of physics for his technical insight and said his business sense comes from experience.

“I’m lucky to have the opportunity to learn,” he said. “I look at areas that need attention and try to apply technology to solve the problems — and I have a lot of persistence.”

Mann started with anti-tank missile technology and branched into making solar cells and other semiconductor technology for spacecraft. As the 1960s wound down, he had worked on more than 400 spacecraft and was growing disenchanted with government contract work.

“I suppose I was bored,” he said. “Then Johns Hopkins came along, trying to apply military technology to a medical laboratory. They needed a commercial partner who understood the technology and the way the military worked.”

Mann is intimately involved in all of his companies and rattles off details, dates and data from studies or clinical trials with the excitement of a graduate student working on his first project:

There’s a cancer vaccine to treat melanoma, and breast, prostate, colorectal and possibly lung cancers and some forms of leukemia, which looks promising in animal testing and has been tried with remarkable success in about 20 people with late stage melanoma. He’s working on asthma, atherosclerosis and autoimmune diseases such as multiple sclerosis, lupus and rheumatoid arthritis.

At USC, Gerald Loeb, professor of biomedical engineering and the first appointment to the Mann Institute, is building tiny injectable radio-controlled devices, called Bions, to stimulate weak or paralyzed muscles.

“We used the Bion to treat incontinence in a woman who hadn’t slept through the night in 10 years,” Mann said.

Mann, who was honored with membership in the prestigious National Academy of Engineering this year, is, at his core, a people person. He likes people and people like him.

“Steve Sample came to my last birthday party, and I was really touched,” he said. “I told everyone that it was my 57th birthday because I was dyslexic.”

In addition to his USC gift, Mann has announced his intention to donate a half-billion dollars to establish similar ventures at other universities.

“I’ve taken care of my six children,” he said. “I’m at a point in my life where all I want to do are things that have a real benefit for mankind.”

And there’s no time to waste.

Al Mann: Humbled, Honored — and in a Hurry