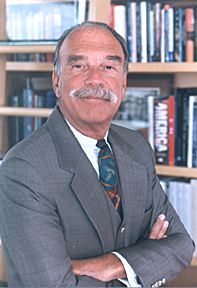 Barry Munitz: “One needs the arts to lead a thoughtful, caring and valued existence.”

USC’s 118th commencement speaker didn’t go to his own graduation from Brooklyn College. He went to his job at AC Nielsen instead. But that isn’t to say Barry Munitz puts no premium on education. In fact, the Getty Trust president and CEO has spent most of his career in academe.

A self-described “prodigious reader of junk espionage,” Munitz divides his life into chapters: one in business, the current one in arts and cultural policy, and several in education administration, with the longest (from 1991 through 1997) as chancellor of the California State University system.

Munitz was born in Brooklyn, N.Y., and was raised by a single parent. “It almost sounds like a joke,” Munitz said, emphasizing that his story is not a tragic one, “but when I was 7, my father went to do some errands and didn’t come back — not for three years, when he came back with another family.

“My sister was not well,” he said. “My mother was busy taking care of her and doing piecework at home, so I’ve been working since the fifth grade.”

Munitz didn’t know then — nor later, going to Brooklyn College on a science scholarship, nor later still, when he decided to pursue the life of a professor — that he’d end up where he is. And where he is, is in the Getty’s new hilltop campus in Brentwood, managing a trust that has a multibillion-dollar endowment and projects worldwide.

“I had no earthly idea what I would be doing,” Munitz said, “and the success of all this has been an unexpected blessing.”

A telegram from Berkeley, delivered to Munitz at Princeton University where he was earning a Ph.D. in literature, lured him out West, where he began his academic career in 1966 as an assistant professor of dramatic arts and literature at UC Berkeley.

Shortly thereafter, he left the university to serve under former UC President Clark Kerr at the Carnegie Foundation Commission on Higher Education. Subsequently, Munitz moved to the University of Illinois system (where he first met USC President Steven B. Sample) and then the University of Houston’s central campus, where he became chancellor.

In 1982, Munitz went to work in the private sector as president and chief operating officer of Houston’s Federated Development Co. He joined the Cal State University system in 1991.

At the helm of the Getty Trust since January of 1998, Munitz continues his ties with colleges, as a member of various boards and as a professor (on leave) in the literature department at Cal State Los Angeles. “I can’t teach full time right now,” Munitz said. “It wouldn’t be fair to students. But I can envision returning to a faculty position one day.”

Only the second person to head the Getty Trust — which oversees one of the world’s major museums, the Getty Grant Program, and institutes devoted to research, conservation and leadership development — Munitz is extremely proud of how diverse the Getty’s audience has become.

“There have been 5 million visitors in three years, but what’s more important than the raw numbers is the new mix — by age, income, demographics — of people visiting,” he said.

Munitz is also credited with dissolving rigid boundaries between the Getty’s various institutes and democratizing the Getty’s review committees.

Though he’s not, he says, an “arts expert or a museum director and wasn’t hired to be,” when Munitz looks around at the state of the arts in Los Angeles, he is encouraged.

“All of L.A.’s cultural organizations are now involved in a comprehensive look at what needs conserving here, in both arts and architecture,” Munitz said.

Citing a few examples as evidence of this trend, he points to the “beautiful cathedral” (the new Roman Catholic cathedral) and the Frank Gehry Disney Hall going up downtown, the Getty Villa (slated to reopen soon) on the Westside and new leadership at the Huntington on the east.

“There’s an aggressive conversation, too,” he added, “on how to pull together — and not just remain separate organizations — to build up a cultural L.A.”

And all those who dismiss the Southland as Tinseltown?

“We pay the price for being the entertainment headquarters,” Munitz said, “but [that view] is inaccurate and insulting. It’s complete nonsense. The people saying it have a second-class inferiority complex — they’re either from New York or wish they were.”

The arts are not only a force in L.A., Munitz believes, but more broadly, to “different degrees of intensity,” a force in people’s lives. “It lifts the quality of life. It adds perspective,” he said. “Food, clothing and shelter are still the basic ingredients — they are necessary, but not sufficient. One needs the arts to lead a thoughtful, caring and valued existence.”

In 1998 Munitz chaired the transition team for newly elected Gov. Gray Davis. Munitz also served as a director of SunAmerica until it was sold.

Quoting Mark Twain’s famous dictum that “Few sinners are saved after the first 20 minute of a sermon” (and cutting the figure to 10), Munitz said his commencement speech is sure to be short.

“When you’re the last thing left standing between graduation and the graduates’ families,” he added, “you don’t want to carry on.”