The Library Foundation of Los Angeles this summer celebrates the rich musical history of the City of Angels with “Songs in the Key of LA,” a new project curated by USC Annenberg School for Communication and Journalism Professor Josh Kun that brings to life the sheet music collection of the Los Angeles Public Library.

The first in a series of collaborations between the Library Foundation and the LA Public Library to mine the library’s vast collections, the project unveils for the first time the world’s only collection of Southern California sheet music. The project is comprised of various elements including a comprehensive anthology, new recordings, a special exhibition, a free concert with Grand Performances and more.

“The Los Angeles Public Library is the place for Angelenos to explore, reimagine and celebrate their history,” said City Librarian John Szabo. “We are pleased to bring this incredible collection to light, as it demonstrates this important fact: Public libraries are every-person institutions, where everyone, from scholars to middle schoolers, can unearth treasures that can teach, inspire and even change their lives.”

Library Foundation President Ken Brecher added: “This unprecedented collection would be lost to us if not for the intrepid public librarians who recognized its importance in the building and defining of Los Angeles. It is our pleasure to work with the library to unveil these songs — some for the first time in 100 years — to the people they belong to, the people of Los Angeles.”

For more than a year, Kun, director of the Popular Music Project at USC Annenberg’s Norman Lear Center, and a group of his students, working with librarians from the Central Library, combed the library’s roughly 50,000-piece sheet music collection, identifying and shaping an archive of Southern California sheet music.

“Together with the library and the Library Foundation, we’re exploring how to tell the stories of our city using song. How do we use the music of the past to talk about the present?” Kun said. “In the age of the Internet, simply having an archive or a collection is not enough. We want to bring these songs to life, to make the collections accessible to new audiences.” 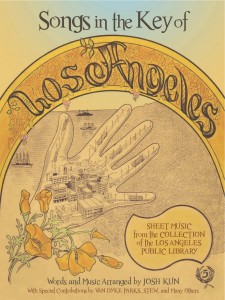 The project is comprised of various elements including a comprehensive anthology, which will be released on June 1. (Photo/Courtesy of Angel City Press)

Dating from sheet music’s heyday (roughly 1850 through the 1950s), the collection covers the period of LA’s growth from remote outpost into sprawling metropolis and provides a rare window into early Southern California music history. Spanning genres from pop to jazz and Mexican folk to blues, all of the songs in the collection — many of which have never been recorded — are either about LA and Southern California, feature key regional songwriters and personalities, or were published by one of the many independent music publishers who were an integral part of the LA music scene at the turn of the 20th century.

Angel City Press will kick off the project on June 1 with Songs in the Key of Los Angeles: Sheet Music From the Collection of the Los Angeles Public Library. Written by Kun, with special contributions from musicians Van Dyke Parks and Stew as well as a host of California historians, the anthology showcases more than 100 vintage sheet music covers from the collection, from California lullabies and LA waltzes, sunshine rags and sunset serenades, to emerging West Coast jazz and the legacy of Mexican folk traditions. Available at bookstores throughout Southern California, the book will also be carried at The Library Store.

That same week, the Library Foundation will release five new recordings of music from the collection by local artists Aloe Blacc, I See Hawks in LA, Julia Holter, Petrojvic Blasting Company and La Santa Cecilia. The recording sessions will be showcased online every two weeks in five short documentaries produced by KCET’s transmedia award-winning arts and culture series Artbound. The first session with I See Hawks will also be featured during the Artbound television series on May 30 at 9 p.m.

On July 1, the exhibition Songs in the Key of LA will open on the first floor of the Central Library in downtown Los Angeles. Featuring a rotating selection of pieces from the collection, the exhibition will use sheet music to explore the early history of the city’s music industry, civic music culture and the role of music in shaping key stories central to the making of LA.

On July 13, the Library Foundation will host Kun, Parks and surprise guests for a special evening of song and story specifically for foundation members. And on July 18, the foundation’s award-winning Aloud series at the Central Library will host Kun and the Quetzal band for an evening of LA music history.

On July 25, Grand Performances will host Szabo and Brecher for “Off the Shelf: Creating LA’s 21st Century Library,” a discussion about the future of the LA Public Library, starting with the “Songs in the Key of LA” project.

And finally, on August 2, Grand Performances, in collaboration with the Library Foundation, will present the Songs in the Key of LA concert. With selections hand-picked by Kun, hometown heroes Ozomatli and special guests will bring songs from the collection to life in a free concert.

Songs of the City of Angels