As the sounds of traditional Korean drums by Jungjin Samulnori filled the halls, hundreds of USC alumni and leaders gathered at the Grand Hyatt in Seoul, South Korea, on May 23 for the official welcome reception and dinner of the 2013 USC Global Conference.

The evening kicked off a three-day exploration of USC connections to Korea and the Asia Pacific region, beginning with a welcome and update from Elizabeth Garrett, USC provost and senior vice president for academic affairs.

“It is hard to imagine a more dynamic place to hold this year’s conference than Seoul,” Garrett said. “Like Los Angeles, the people of this city have embraced transformation and flexibility toward that which is relevant and useful in modern contexts. Seoul has evolved as a result of bold thinking and the can-do spirit of its people — people who maximize nearby resources and integrate their rich cultural heritage with entrepreneurial vision.” 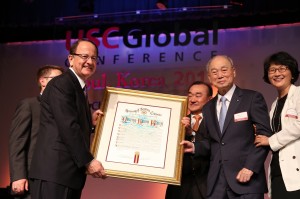 Garrett updated attendees on some of USC’s recent developments involving global programs, including the World Bachelor in Business offered through the USC Marshall School of Business in partnership with universities in Milan and Hong Kong, and the Global Executive Doctor of Education program offered through the USC Rossier School of Education. She also highlighted the inaugural group of USC International Artist Fellows — a distinguished group of scholar-artists that includes a playwright from China, a guitarist from Russia, an animator from Brazil and a visual artist from Mexico — who will join the university in the fall.

She also acknowledged the co-chair of the event, USC Trustee Yang Ho Cho, chairman and CEO of Korean Air and chairman of Hanjin Group, as well as many other distinguished guests in attendance. 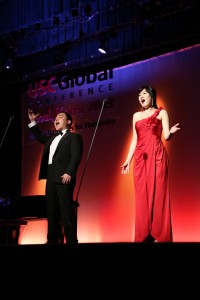 One of the evening’s highlights was the presentation of a special citation by USC President C. L. Max Nikias to Korean alumnus Younghoon Kang MA ’66, PhD ’73, who served as a groundbreaking political leader for South Korea as a member of its National Congress and as prime minister from 1988 to 1990, during which time he oversaw the nation’s transition from military rule to a modern democracy. Kang, who was accompanied to the stage by his son and daughter-in-law, was visibly moved by the acknowledgment of his alma mater. As Kang stood to receive his honor, the crowd rose to a standing ovation, led by first lady Niki C. Nikias.

Marking the end to an evening filled with the renewal of old acquaintances and the forging of new friendships, two USC Thornton School of Music alumni, soprano Juhye Kim and tenor Sungwook Kim, who were both raised in South Korea, performed renditions of opera classics.

It’s the second time in three years that members of the law school’s Center for Transnational Law and Business spoke to the trade organization.