As part of USC’s 130th commencement on May 17, the USC Annenberg School for Communication and Journalism celebrated the conferral of bachelor’s, master’s and doctoral degrees to 961 students.

As Dean Ernest J. Wilson III welcomed graduates to the ranks of USC Annenberg alumni, he thanked them for the hard work they’ve done as students, interns and collaborators while also completing successful studies.

“We live in an extraordinary and dynamic era where media and communication is at the center of everything we do. The information age is upon us, and much of the established order is completely up for grabs,” Wilson told the graduates and their families at the School of Journalism ceremony.

“Journalism graduates, public relations graduates, this is not only your day today — this is your time,” he added. “This is your era to seize this world and reinvent it.”

Acknowledging the work USC Annenberg students are doing to contribute to the news and communication economy, Wilson said, “Many of you are already working day and night to make this truly the golden age of your fields, both in terms of content and in terms of commerce.”

Wilson cited the “Annenberg advantage” as the path that will help graduates be productive in the work force. USC Annenberg tears down “the old, rigid silos of the past,” builds cooperation and “ensures that our sharp, flexible and inventive graduates can walk into any environment, any enterprise, and know that they could do any job in the place,” he said.

Wilson also thanked Geneva Overholser, director of the School of Journalism, for her leadership over the past five years. Overholser will step down from her role next month.

“Professor Overholser has been an indefatigable advocate for the Fourth Estate as the backbone of democracy,” said Wilson, adding that she remains committed to digital technology, diversity and information in the public interest.

As one of her last acts as director, Overholser delivered the commencement speech to the School of Journalism, taking the chance to tell graduates how well their time at USC Annenberg will prepare them for “a lifetime of productive work.” 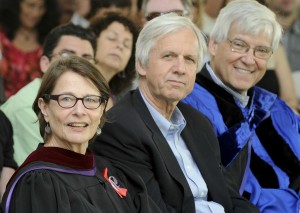 Acknowledging the complex job market that awaits graduates, she added: “There has never been a more interesting time to enter these fields than at this moment. You get to reinvent them. You get to write new rules, shape new economic underpinnings and create new connections with the people formerly known as the audience. You get to find new ways to enrich the civic conversation in this country, help people live fuller lives and create a stronger citizenry.”

Overholser also took the opportunity to address the journalism naysayers — those who say “journalism is over.”

“The journalism that you are helping reinvent is just coming into its own. More people want to be part of it than ever. And the potential for a better, fairer, more inclusive form of information in the public interest is boundless,” she said.

And that new inclusiveness makes journalism a more exciting field than ever before.

“What was a top-down, too often arrogant craft, one that left lots of people out, is now a wide-open experiment in progress,” Overholser said.

In fact, she noted, thanks to the disruption of the old-school models, journalism and public relations graduates have a shot at jobs that wouldn’t have been open to them years ago.

“The fact that the old, rigid system — in which you had to work your way up over a period of decades — has collapsed means that you fresh graduates can go directly into jobs you could never have dreamed of entering before — and this applies to journalism and PR grads equally,” she said.

“You can hit the ground running, putting to work your open minds and your digital skills, your understanding of social media and your excitement about the future.”

At the same time, while “everything seems up for grabs,” graduates need to keep in mind the tenets that have not changed. Integrity and good judgment are paramount qualities that “remain absolutely critical,” Overholser said.

“Along with your smarts and your skills, you must be sure to bring integrity, to bring good judgment, to your work. Now when things are changing, these two [along with courage] are needed more than ever. Your skills, however dazzling, cannot compare in importance to your moral leadership.”

The jobs held by recent graduates should inspire anyone with lingering doubts, said Overholser, who listed a few of the jobs that USC alumni are holding, including such posts as the Sacramento bureau chief for Reuters, an investigative TV reporter in Albuquerque, Texas, a multimedia writer for The Seattle Times and a production assistant for ESPN. USC Annenberg graduates, she said, have found opportunities at The Texas Tribune, Los Angeles Times, The Washington Post, ABCNEWS.com, the Huffington Post and People. 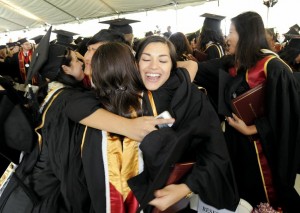 “We have a publicist for Kobe Bryant and a manager of public information for the Tournament of Roses,” she said.

On a personal note, Overholser left the new USC Annenberg graduates with a thought on the notion of trying to “have it all” as they pursue career and family.

“Life is full of twists and turns, and you won’t always be in charge of them,” she said. “What you’ll be in charge of is how you respond to them. Keep love in your heart and hold fast to your passion for good work, and you’ll be fine.”

Speaking to the School of Communication graduates and their families, Los Angeles County Supervisor and former LA City Councilman Zev Yaroslavsky drew on the experiences of two successful leaders he has worked with — USC President Emeritus Steven B. Sample and John Wooden, the legendary head basketball coach of the University of California, Los Angeles.

He called Wooden a “life coach and a philosopher” and Sample “the man who led USC into the 21st century with soaring academic achievements and a commitment to the community.”

Yaroslavsky, who quoted Wooden, said everyone is ultimately informed by their character: “Character is more important than reputation because reputation is merely what other people think of you; character is what you really are, and only you know what that is.”

“What people think of us is important,” he continued. “But what’s far more important are our core values — the values that we are willing to defend regardless of what others think.”

Yaroslavsky cited The Contrarian’s Guide to Leadership, Sample’s book in which he urges leaders not to form an opinion before gathering relevant facts and arguments.

“A leader who jumps to a conclusion before hearing all the facts will, more often than not, regret it,” he said. “Leaders command a stronger and more loyal organization when their team members know that their opinions will be heard and valued, even if they are contrarian points of view. Avoid the temptation to jump to conclusions before you have all the facts.”

Again quoting Sample, Yaroslavsky said, “Leaders aren’t the only ones with good ideas. Good leaders get their best ideas by keeping an open mind and open ears wherever they go.”

Sample wrote that artful listening “is not just an asset — it’s a necessity,” Yaroslavsky said.

And Sample and Wooden both agreed that great leaders give credit elsewhere but accept blame themselves.

“Any leader who fails to grasp this basic principle will not long endure in that leadership role,” he said. “In any organization, nothing builds confidence in a team, and success in an enterprise, more than the knowledge that the leader will have your back when the going gets tough. People who feel this way about their leader will go to the ends of the earth for him; those who don’t will do the bare minimum, if that.”

Yaroslavsky also touched on the shift in communication since he first took office in 1975 and how important communication is in politics, where “perception is reality.” His own website features interactive pages, stories, links to social media and a video channel dubbed ZevTV.

“Back in the day, traditional print and broadcast outlets were the only way to get your message out,” he said, recalling that he used to be known as the master of the 30-second soundbite. “Today, if you can’t say it in six seconds, you’re out of the story.”

But no matter how news consumers access their information, whether via smart phones or tablets, “the bottom line remains that communication is transmitted through the voice of the communicator’s character,” Yaroslavsky said.

“Today, your schooling is formally completed, and I warmly congratulate you on that outstanding accomplishment. But your real education begins now, as you embark on the next chapter of your lives. As you do so, I wish you an abundance of character and wisdom. Good luck to each and every one of you.”

This year’s Student Recognition Awards honored an exceptional group of USC’s graduating students — ranging from a scholar of Tanzanian faith healing to a top 20 finalist in NBC’s America’s Got Talent.

Architecture is a beacon of innovation and creativity for those who want to bring to life novel design concepts through experimentation, research and exploration.

The dissertations produced by the 14 doctoral students who graduated this year from the USC Annenberg School for Communication and Journalism reflected the school’s wide range of scholarship, interest and disciplines.