Bryshon Nellum once again carried the American flag, this time leading his fellow graduates of the USC Price School of Public Policy in their commencement procession.

It was only fitting that he finish his time at USC the same way he completed the Summer Olympics in London last year, hoisting the U.S. flag at the closing ceremony.

Overcoming a crippling act of violence to reach Olympic glory and on May 17 earning a Bachelor of Science in policy, planning and development, Nellum is the ultimate embodiment of the Trojan spirit, according to USC Track and Field Coach Ron Allice.

“He exemplifies everything you would want in a Trojan athlete and a Trojan student,” Allice said. “Whoever coined the phrase ‘Fight On’ had him in mind.”

USC Price Dean Jack H. Knott noted during his commencement address that “[Nellum’s] Trojan resilience and determination is a true inspiration about what can be possible for each of us.”

Nellum entered USC in 2007 as the best prep sprinter in the nation, but when leaving a Halloween party in 2008, a single gunshot left three pellets in his legs.

Two gang members were sentenced to 15 years each for the crime. Prosecutors said the men mistook Nellum for a rival gang member.

Doctors performed two surgeries to repair his legs but warned that he was never likely to reach his previous elite level in sprinting.

“First hearing that comment that I wasn’t going to be able to run again was devastating, but in the same breath, I told myself I’m going to do whatever I have to do to continue to run,” Nellum said. “It took baby steps — I had to learn to crawl, then walk and then start running again.” 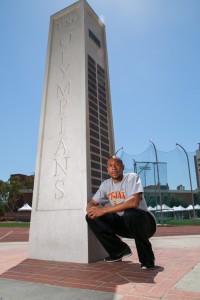 Bryshon Nellum entered USC in 2007 as the best prep sprinter in the nation. (USC Photo/Tom Queally)

When he returned to the track after 18 months, his 400-meter time was one second slower than what he ran in high school. At that time, he was running with one pellet still remaining in his left leg. Doctors advised him that the pellet’s location near a nerve made it too risky to remove.

But a year later, after collapsing during the middle of a race, he opted to get surgery to remove the final pellet, despite the risks.

“I gave it my all. Now I have no choice but to get this surgery,” Nellum said at the time.

The surgery was successful, and he returned to the track healthy in 2012. He finally began running faster than he had in high school, and the 2012 Olympics once again were within his sights.

“I’ve been doing track and field since I was 7 years old, and my goal was always to compete in the Olympic Games,” Nellum said. “Being so close to that goal, that’s when the determination kicked in. I couldn’t let this take it away from me.”

Nellum went to London happy just to have the opportunity to experience the Olympics, no matter the results. Following a frustrating finish in the individual 400, in which he missed qualifying for the final by three one-hundredths of a second, he helped the U.S. 4×400 relay team to a silver medal.

Other members of the U.S. Olympic squad recognized the magnitude of Nellum’s comeback by selecting him as flag bearer at the closing ceremony.

The athlete’s story received tremendous international attention. In a speech, President Barack Obama called him an inspiration and later shook his hand at the White House. When Nellum returned to USC for fall classes, students stopped him to take pictures, get autographs and offer congratulations as he walked on campus.

Nellum said one of his favorite classes at USC Price involved the history of planning and development with Professor David Sloane in spring 2012.

“There’s one assignment where everyone has to write a paper in which they interview someone they care about who is at least 25 years older, and he did a great paper on his grandmother,” Sloane said. “He was quiet but a really fascinating guy.”

Nellum admitted that he was reserved for a long while after the shooting, trying to make sense of such senseless violence. It really wasn’t until after the Olympics that he began to feel like himself again.

“As I started to get interviewed about my story and I was able to talk about it, it helped free me from my isolation, and I started to come out of my shell,” Nellum said.

Though he will be focusing his attention on the World Championships in Moscow in August and the Olympics in Rio de Janeiro in 2016, Nellum said he plans to go to graduate school at USC.

Nellum credits his mother, LeShon Hughes, and his grandmother, Brenda Jones, with helping him maintain his faith following the tragedy. He gave them an appropriate tribute by breaking USC’s Loker Stadium records on Mother’s Day, the weekend before graduation, posting personal bests in the 200 (20.23) and 400 (44.76).

Hughes said her only son’s experience at USC has felt like a long dream, haunted by unimaginable lows and blessed with amazing highs, but one from which she expects to awake with a big smile.

“To see him graduate college means more to me than his athletic accomplishments,” Hughes said. “It’s one more miracle. He’s had so many of them.”

This year’s Student Recognition Awards honored an exceptional group of USC’s graduating students — ranging from a scholar of Tanzanian faith healing to a top 20 finalist in NBC’s America’s Got Talent.

Architecture is a beacon of innovation and creativity for those who want to bring to life novel design concepts through experimentation, research and exploration.

The dissertations produced by the 14 doctoral students who graduated this year from the USC Annenberg School for Communication and Journalism reflected the school’s wide range of scholarship, interest and disciplines.