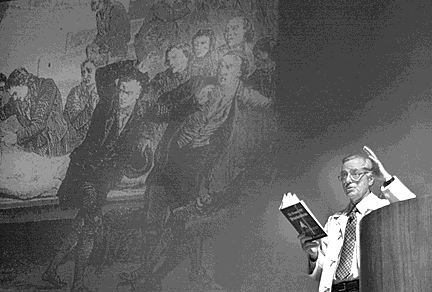 Gene therapist W. French Anderson reads from “Frankenstein” at the May 3 lecture “‘Frankenstein,’ ‘Gattaca’ and Gene Therapy.” The screen shows a sketch of a crowd scene at an execution.

W. French Anderson has been called Frankenstein more than a few times. And he was the scientific consultant for “Gattaca,” a thoughtful science fiction movie about a society with unrestrained genetic science.

So it should surprise no one that Anderson, a professor of biochemistry, molecular biology and pediatrics in the Keck School of Medicine of USC, and an internationally known gene therapy researcher, believes these two stories have something important to tell us about science.

“The message of ‘Frankenstein’ that attracted people in 1818 and still energizes us today is: How much is too much in science? Just because you can do something, does that mean you should do it? Are there experiments that should never be done?” he asked. “Gattaca is an example of what our society will be 100 years from now if we continue without any controls. It would be a horrible society.”

Anderson’s lecture, “‘Frankenstein,’ ‘Gattaca’ and Gene Therapy,” originally prepared last year for the annual meeting of the American Association for the Advancement of Science, was given May 3 in Mayer Hall on USC’s Health Sciences campus.

When 18-year-old Mary Shelley conceived of ‘Frankenstein’ in the summer of 1816, people truly believed that scientists were on the verge of creating life or bringing the dead back to life.

“They were doing some extraordinary experiments,” said Anderson. In one, scientists arranged to acquire the body of a convict, Matthew Clydesdale, immediately following his execution so he could be shocked with electricity, a recent discovery. “He thrashed around so that people thought he was alive. It so terrified them that he was ‘rekilled’ by cutting his jugular.”

In Shelley’s novel, it is the monster, or “daemon,” who is eloquent and rational in the bitter relationship with its creator Frankenstein. But in the 1931 Boris Karloff classic, theaters kept stretchers in the lobby to carry out those overcome with fear of the monster. But the point in all the Frankensteins was the same, according to Anderson:

“If we do research we shouldn’t be doing, we will be punished.”

In 1997 Anderson was attending a meeting of the Recombinant Advisory Committee (RAC), which reviews research proposals for ethical considerations, when the first newspaper ads for Andrew Niccol’s “Gattaca” appeared. The ads invited people to order a baby much like they would order a car: Readers had to examine the fine print to see that the ads were really promoting a movie. Committee members, who thought “Gattaca” was a real company, were shocked.

“In ‘Gattaca,’ you are your DNA. Its point was that there is no gene for the human spirit,” said Anderson. “Unless there is a clear stopping point, we will slide down the slippery slope to ‘Gattaca.’”

Calling himself “a presumptuous scientist,” Anderson poses three questions to aid society in stopping that slide.

First, is there a need to do the research? In the case of gene therapy, the answer is yes, said Anderson. “Some babies are born with lethal defects, and it is immoral not to go forward with research that can alleviate human suffering.”

Second, is there a moral standard by which to judge research? Anderson, who met with the Vatican Council in the early 1980s, said that in 1983 the pope issued what the scientist has come to believe is an appropriate moral standard: The research must increase human dignity.

Anderson said that the last question, “Is there a process to ensure that the moral standard is followed?” has no clear answer. Entities like RAC are a start, but moral standards are easily lost in the positive glow of seemingly innocuous scientific advances. He noted that gene therapy for hair growth is coming to fruition.

“If we can choose to have hair growth, why not choose hair color? If we can do hair color, why not skin color? What about other racial characteristics? Determining what is normal and what is an improvement is fraught with cultural biases,” he said. “My belief is that the only protection we as a society have is an educated and informed public. ‘Frankenstein’ said, here is the danger. ‘Gattaca’ said, here’s where we could end up. These stories help frame the moral issues of human genetic engineering.”