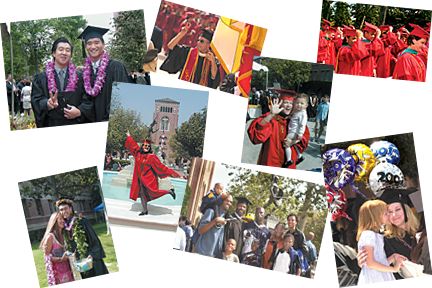 Munitz, president and CEO of the Getty Trust, touched on a range of topics in his address, from USC’s rapid academic progress in the last 10 years to the importance of K-12 education.

“Your institution is in the top 1 percent of all colleges and universities in terms of selectivity,” he told cheering students in Alumni Memorial Park. “USC has had the single largest increase in SAT scores [for incoming freshmen] in the past decade of any institution in the country.”

Sharing the platform in front of Doheny Memorial Library with Munitz was the other recipient of an honorary doctorate, USC trustee and benefactor Alfred E. Mann. Also present, along with trustees and senior administrators, were Cardinal Roger M. Mahony, who gave the baccalaureate address a day earlier, and former USC President John R. Hubbard.

Munitz kept his promise of a short speech. “The person giving the commencement address is like the body at a funeral: You need one to have the ceremony, but you don’t expect it to say very much.”

When he came to the Getty Trust in January 1998, after decades as a college administrator and an intervening career in business, he said, he learned that the trust’s founder, billionaire J. Paul Getty, had three secrets: “Get up very early, work very hard – and discover a great deal of oil.” But Getty also believed that higher education should provide deeper levels of understanding, and Munitz congratulated students for having the privilege of studying with USC’s “extraordinary” faculty.

He also congratulated members of the first class of USC’s Neighborhood Academic Initiative to graduate – 11 years after being chosen, as sixth-graders, to take part in the rigorous preparatory program.

And he lobbied graduates to consider joining the ranks of public school teachers.

“It may not be fashionable to respect or envy classroom teachers, but until people of your skill and energy are committed to becoming one, unless and until we honor and reward our public school teachers, we will never improve and reform this society.”

He encouraged graduates to put their new knowledge in the service of a society that “desperately, desperately needs your help.”

“It is essential that you never stop thinking of giving back,” Munitz said. “I hope that while you work within the system, you never lose your passion for change.”

Before Munitz spoke, valedictorian Paritosh Prasad cited the “selfish pleasure of volunteering.” Prasad, who completed a double major in psychobiology and political science, spent one of his summers as a counselor for inner-city youth at his grandparents’ M.K. Gandhi Institute for Nonviolence, located in Memphis, Tenn.

In his speech, Prasad quoted Gandhi – “We must be the change we wish to see.” Then, he added, “The love of learning and the gift of service is ‘SC’s gift to us.”

President Steven B. Sample, presiding over his 10th commencement at USC, told the graduates they are now “marked for life” as Trojans.

“The Trojan Family is not just a figure of speech; these are tangible family ties. You are now, and always will be, members of this special family.”

The commencement ceremony began with a soaring version of the national anthem, sung this year by Patricia Adela Sullivan, who was also receiving a master’s in music performance. A crowd estimated at 35,000 jammed Alumni Park for the event.

As always, it was a day for family and friends to toast their graduates and shower them with bouquets and flower leis.

USC commencements have become nearly an annual ritual for the Chaudhry family of Granada Hills; of the 15 cousins born to four brothers, half have graduated from or are attending USC – and most of the rest are not yet college age.

This year was no different. Aarmira Chaudhry, 22, was celebrating her degree in accounting from the Leventhal School. “Three of my cousins graduated before me, and another three will graduate after me,” she said.

Her father, Mohammad, said, “This is an incredible day for us.”

USC graduates don’t let the passage of time dim their ardor for their alma mater either. When Sterling Wallace at tended USC, Frank Gifford was the football team’s star player. “That was half a century ago, but at times it seems like last week,” Wallace said.

In a USC tradition, Wallace joined a handful of other members of the Class of 1951 in walking under the “Half-Century Trojans” banner celebrating alumni of 50 or more years past.

The only African-American member of his class to attend the day’s festivities, Wallace is a retired teacher and high school counselor who now volunteers once a week at 32nd Street Elementary School.

After the main ceremony, graduates and their friends and families filed out to attend individual school satellite ceremonies, where diplomas were handed out and more speakers – some of them celebrated alumni – held forth. (See related story, this issue.)

Actor LeVar Burton, whose own USC career was interrupted as a sophomore when he was cast as the star of the landmark miniseries “Roots,” made a dramatic entrance at the School of Theatre ceremony. He and theater Dean Robert Scales rose from beneath the Bing Theater stage on a brand-new lift amid a swirling cloud of smoke.

After exhorting the theater graduates to remember “that what we do in this town goes out and forms the belief systems … of folks around the globe,” Burton closed with words from “the great sage Satchel Paige: ‘Work like you don’t need the money. Love like you’ve never been hurt. Dance like nobody’s watching.’”

Cheers, Flowers and Wise Words Send 2001 Grads Into the World