Los Angeles has yet to match the economic and cultural life of downtowns in cities like Chicago or San Francisco, but it has made great strides over the last two decades, and plans are under way to help accelerate that development. 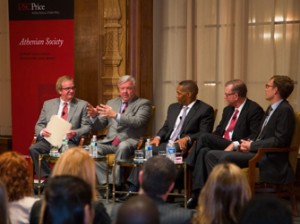 That was the consensus from a panel of business and civic leaders who discussed “The Revitalization of Downtown Los Angeles: The New Wilshire Grand” during the May 2 Dean’s Speaker Series event presented by the Athenian Society, the premier philanthropic support group of the USC Price School of Public Policy. The discussion, which took place in downtown LA’s Millennium Biltmore hotel, was the last installment of the event series for 2012-13.

USC Price Dean Jack H. Knott noted that “having a downtown with a strong residential component, transportation hubs, increased retail activity and people walking the streets is essential for the economic growth of the city. LA needs a vibrant urban core to keep the city vibrant.”

Moderated by Los Angeles Times staff writer Roger Vincent, the event first focused on the demolition of the 15-story Wilshire Grand Hotel at 7th and Figueroa and its replacement — a $1 billion, 70-story, state-of-the-art building, which will be the second tallest in Los Angeles when it opens in 2017.

“This is a game-changer,” said Hal Bastian, executive vice president and director of economic development for the Downtown Center Business Improvement District (DCBID). “It makes the statement that we’re becoming a world-class downtown.”

The new hotel will feature high-speed elevators that take people up to a 70th floor sky lobby in 45 seconds as well as a signature restaurant, rooftop pool, observation deck and a spire topping out at 1,100 feet. It will include 400,000 square feet of office space and 50,000 square feet for retail. Sidewalk cafes, shops and entertainment are planned.

According to Christopher Martin, the architect of the new hotel, the hotel complex will become a Los Angeles destination in part because a planned new streetcar will travel a loop around the center of downtown, with a big turnaround in front of the Wilshire Grand.

“With the 7th Street/Metro Station being right there, the hotel will be at the [downtown] transportation hub,” explained Martin, CEO of AC Martin Partners Inc. and Martin Project Management.

Tanner Blackman, planning director in the Office of Los Angeles City Councilmember Jose Huizar, noted that the City Council already has allocated part of the funds needed for the streetcar and will now seek federal funding for the remainder.

“[The streetcar] will be a place-maker and a job-maker,” said Blackman, who is also an adjunct professor of planning at USC Price.

Bastian suggested that the permanence of a streetcar being embedded in the street “creates certainty for development in the future.” He also provided statistics showing downtown development momentum building over the last 15 years.

Since 1998, according to the DCBID, property values in downtown LA doubled; slow growth gave way to $15.7 billion in investments; 93,000 new jobs were created; the small number of food, retail and entertainment options expanded to more than 200; empty nighttime streets turned into bustling ones; and a resident population of 18,000 grew to more than 50,000. Among 2011 downtown residents, the median age was 33, while 80 percent had a college degree, and their median income was $86,300.

Yet panelists acknowledged that downtown still faces challenges both perceived and real.

In a Q-and-A session, an audience member asked how the public could be convinced that downtown is safe.

“Everything bad they’ve heard about L.A. is true ─ 20 years ago,” Bastian said. “We now have security on the streets 24 hours a day. Also, the No. 1 thing that creates public safety is people walking on the street; we’re getting that now.”

Blackman explained that to further diversify downtown and keep people living in the area, more attention to services will be required.

“Livability is a big focus of our [Huizar’s] office,” he said. “We need more bike lanes and charter schools.”

Alison Spindler, a Master of Planning student at USC Price, said that in talking about “multimodal transportation,” the panel touched on a concept often discussed in her classes.

“Including opportunities to walk, bike and use trains is the future of cities,” she said. “It was also good to hear the business community’s point of view and see them interact.”