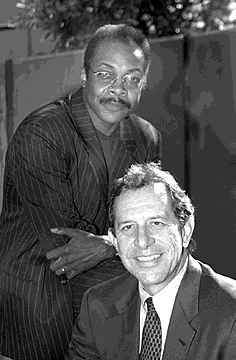 Steve Montiel, front, director of the Institute for Justice and Journalism, and keynote speaker Ellis Cose, contributing editor of Newsweek.

Work done at an April 28 conference organized in part by the USC Annenberg School for Communication and its Institute for Justice and Journalism may help world leaders fight against racism, discrimination, xenophobia and intolerance.

The event – the Southern California Preparatory Conference to the United Nations World Conference Against Racism – produced recommendations to be included in a report to the U.N. Commission on Human Rights.

Mobilizing governments and people to fight racism “is a huge undertaking, and the media is crucial to that effort,” said Steve Montiel, director of USC Annenberg’s Institute for Justice and Journalism. “We are involved in the conference to learn as much as we can from everyone involved, as well as to begin building a network of individuals and organizations that will be able to help journalists do a better job of reflecting our multiracial world.”

Some of the recommendations offered by conference participants include:

• The United Nations should hold worldwide hearings on the impact of television, movies and other communications media on issues of racism, xenophobia, national origin discrimination, sexism, homophobia and other forms of intolerance.

• All K-12 school-aged children, as well as their parents and educators, should receive human relations training that promotes dialogue and understanding of both the current and historical sources of racism, bigotry and prejudice.

• Governments should help social and economic justice organizations provide assistance to immigrants and the poor.

• Media groups should identify promising approaches to professional development that will result in greater retention of people of color in news media jobs, diversity in management and more complete and accurate news coverage.

These and other recommendations will be considered at the United Nations World Conference Against Racism, Racial Discrimination, Xenophobia and Related Intolerance, Aug. 31 through Sept. 7, in Durban, South Africa, said Robin Toma, executive director of the Los Angeles County Commission on Human Relations. The commission, along with USC Annenberg School for Communication, the USC Institute for Justice and Journalism, the U.N. Association of the USA and the Friends of the U.N., organized the April 28 conference.

“Few communities in the world have so many peoples from different parts of the globe as we do in L.A.,” Toma said. “This gives the county Human Relations Commission the chance to share some of the lessons we’ve learned – one being that to change attitudes, you need to do more than enact laws and establish policies. You need institutional commitments to create programs and practices that encourage people to work together and build relationships of trust.”

The Institute for Justice and Journalism, made possible by a Ford Foundation grant, was established to improve and expand news coverage of social justice issues, said Montiel.

“We hope our work will result in a renaissance of the kind of justice journalism that we saw in the civil rights movement of the ’60s,” Montiel said. “We can’t depend on the Supreme Court or other governmental entities to make this happen. We have to tell these stories.”

“It means repeatedly calling the media to task,” Cose said in a telephone interview before the conference. “The media sets a large part of every community’s social and political climate; it can be very important in setting a positive climate or helping poison it.”

Participants at the April 28 conference included law professor and United Nations expert Edwin “Rip” Smith, sociology professor Darnell Hunt, officials from the United Nations, representatives from a number of non-governmental organizations in Canada and the United States and local community organizations and representatives from cities in Los Angeles and Orange counties.