The USC Marshall School of Business kicked off the USC Marshall Initiative, a $400 million fundraising drive, with a gala on May 8 that drew some 300 donors, friends, faculty, administrators and students to Warner Bros. Studio, where they were welcomed by Kevin Tsujihara ’86, CEO of Warner Bros. Entertainment and host of the event.

At the event, USC President C. L. Max Nikias spoke of USC Marshall’s legacy and its longtime ties to the city of Los Angeles and the global business community.

“For more than 90 years, the Marshall School has been a dynamic cornerstone of USC. The roots of its entrepreneurial DNA can be traced back to USC’s chief founder, Robert Maclay Widney, who is also considered the chief architect of modern Los Angeles,” Nikias said. “Today that entrepreneurial spirit is carried on by the school’s students, faculty and alumni, who take what is taught in the classrooms at USC into boardrooms and businesses around the world.”

The school seeks to raise $400 million to fuel globally relevant programming and opportunities. The funds will support endowments for academic programming, student scholarships and faculty research and teaching in addition to supporting capital projects and other critical priorities. The initiative is part of The Campaign for the University of Southern California, a multiyear effort to secure $6 billion or more in private philanthropy to advance USC’s academic priorities and expand its positive impact on the community and world.

“We are altering the business landscape across Southern California and beyond,” said USC Marshall Dean James G. Ellis, setting the tone for the evening by speaking of the school’s mission and trajectory. 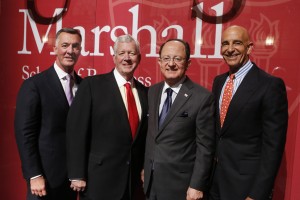 USC Trustee Frank Fertitta III ’84, chairman and CEO of Las Vegas-based Fertitta Entertainment and Station Casinos, spoke to the crowd about the global franchise he and his brother, Lorenzo Fertitta, have built. He attributed his success to USC Marshall, saying his education gave him the tools to help their companies grow.

“We are now attracting the best and brightest from around the world and are creating the international business leaders of tomorrow,” Fertitta said.

Attendees also heard a keynote speech by USC Trustee Thomas Barrack Jr. ’69, CEO of Los Angeles-based Colony Capital LLC, who recalled the moment when the university and USC Marshall changed his life — when he attended one of the school’s business communications classes.

“My life would be totally different if I didn’t have a Trojan education,” said Barrack, who discussed his career trajectory and marveled at the “magic” of the Trojan Family.

Comparing the university to jewelry made of rare and precious pieces, Barrack said, “The faculty are diamonds, the students — rubies — and the administration — emeralds — all held together by a seamless chain of global alumni.”