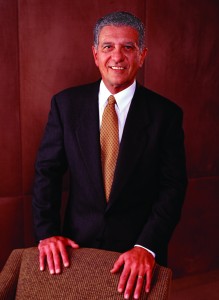 Anthony Marnell II’s donation is one of the largest recent gifts to an architecture school in California.

Architect Anthony Marnell II ’72, known for the design and construction of renowned resort, hotel and gaming properties, has made a $1 million gift to the USC School of Architecture to establish a unique multidisciplinary design studio for upper-level undergraduates to foster design-builders. It marks one of the largest recent gifts to an architecture school in California.

“The M Studio,” as it will be known, will focus on the critical thinking necessary to complete a large-scale, complex construction project. The one-semester studio, directed by a faculty member who is also an accomplished master builder, will include instruction in business, real estate development and engineering, among other disciplines.

His gift is part of The Campaign for the University of Southern California, a multiyear effort to secure $6 billion or more in private philanthropy to advance USC’s academic priorities and expand the university’s positive impact on the community and world. The School of Architecture has a goal of $75 million as part of the campaign.

“With his generous gift, Anthony Marnell honors our faculty and the many students who will benefit from this innovative new program,” said Elizabeth Garrett, USC provost and senior vice president for academic affairs. “As a USC graduate and successful practitioner of the art form, his support elevates the prestige of our School of Architecture and our university.”

School of Architecture Dean Qingyun Ma said: “Tony’s sense of social responsibility transcends the profession and global culture, and has become a great source of my own inspiration. The M Studio will bring creativity, constructivity and responsibility together, and engender a new paradigm for architectural education.”

Marnell said the idea of creating the studio was a collaborative effort between himself and Ma.

“Being a design-builder my whole life, I see the value of students having more experience both practicing architecture and building their designs,” he said.

The concept of a master builder was common through the Renaissance, he said. “Architects were also general contractors, and I was fascinated by that.”

When Marnell received his bachelor’s degree in architecture in 1972, that combination did not exist in this country, he said, and the American Institute of Architects (AIA) would not let an individual register both as a designer and builder. Today, the organization embraces design-build.

“The M Studio is a new opportunity for exposing students to that possibility, if it is part of their dream going forward,” said Marnell, who added that he is open to come share his experiences at the studio.

Marnell, who is a member of the School of Architecture’s Board of Councilors, worked for several architectural and construction firms after college, including Corrao Construction, which became Marnell Corrao Associates after the founder’s retirement in 1982. As CEO and chairman of the firm, Marnell oversaw the building of well-known Las Vegas casinos, such as the Mirage, Bellagio and Wynn Las Vegas, and several Caesars Palace expansion projects, including the Forum Shops.

In addition to overseeing the design and construction of casinos and hotels, Marnell held the positions of chairman and CEO of the Rio Hotel & Casino Inc., and its wholly owned subsidiary, Rio Suite Hotel & Casino, which he built and operated until its acquisition by Harrah’s Entertainment Inc., in 1999.