The event, held at Town & Gown on April 30, was presented by the USC Schwarzenegger Institute in partnership with the Athenian Society, the premier philanthropic support group of the USC Price School of Public Policy.

Schwarzenegger applauded McCain and Bennet, co-sponsors of the comprehensive immigration reform legislation in Congress, for working together to come up with a solution for a complicated issue that lawmakers have struggled with for decades.

“The sad story is that many members of Congress have had a major chutzpah deficit,” Schwarzenegger said. “We are now so fortunate that a brave group of leaders has emerged. I want to say thank you to that ‘Gang of Eight’ — which includes Sens. McCain and Bennet. They reached across the aisle tirelessly, and they brought the chutzpah back.”

“There is no better place suited to host this forum and this discussion on immigration reform than here at USC — not only because Arnold Schwarzenegger probably is our most famous immigrant in the United States, but also because USC takes great pride in being home to more international students than any other American university,” Knott said.

Comprehensive immigration reform would have a dynamic impact on the future of the U.S. economy, McCain said during the forum’s first panel session.

McCain explained that there are 11 million undocumented immigrants in the United States, and under the proposed bill, those in the country by Dec. 31, 2011, will be granted permanent legal status with the option to proceed through a stringent, 13-year pathway to citizenship. The nation needs these workers, he added, because in 1955 there were 16 workers for every recipient of social security, while today the ratio has fallen to 2 to 1.

Schwarzenegger provided the statistics for California, which has nearly one-quarter of the nation’s illegal immigrants, with nearly 1 in 10 California workers being undocumented.

Bennet said it is untrue that this bill will take jobs away from Americans, indicating that 40 percent of Fortune 500 companies were started by immigrants, and those companies create jobs for American citizens. He also pointed out how two-thirds of Americans support a pathway to citizenship.

“I think that’s because people understand that we are a nation of immigrants,” Bennet said. “The other options are spending a lot of money to try to send people back to where they came from — which nobody is seriously proposing — or having a permanent subclass of people living in the United States.”

McCain and Bennet are aiming for a June vote on the bill in the Senate. They hope to reach 70 votes to put pressure on the U.S. House of Representatives to support the legislation.

McCain made an appeal to his Republican colleagues in the House that passing immigration reform provides an opportunity for the GOP to engage Latino voters.

“This will not gain one single Hispanic voter by passing this bill, but what it will do is put us on a playing field where we can compete,” McCain said. “… If we don’t do this, you can’t begin the conversation with our Hispanic voters, and all you have to do is the math on the growth of the Hispanic voter in this country.” 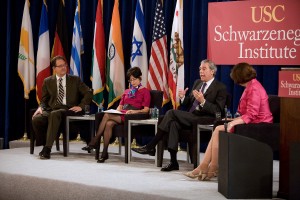 Myers, a professor at USC Price and author of the book Immigrants and Boomers: Forging a New Social Contract for the Future of America, said that people assume there will be a tidal wave of immigrants waiting to come to the United States, but the truth is that we will be begging Mexican workers to cross the border. Hondagneu-Sotelo, a sociology professor at the USC Dornsife College of Letters, Arts and Sciences, agreed that there will not be the huge wave of immigrants like those who arrived from 1965 to 2010.

The need for immigrants will increase in the near future because the 60 million workers from the baby boomer generation, representing 40 percent of the country’s workforce, are beginning to retire. Immigrants are essential to plug holes in the workforce, expand the range in taxpayers and buy the homes of retirees.

Gutierrez explained that immigrants are essential for the United States to maintain or grow its share of the world economy. They are needed to hold our population, which is currently at 1.9 children per woman. He believes a declining population results in a declining country.

“This could give us such an amazing advantage,” Gutierrez said. “If we get this right, no one’s going to catch up to the U.S. in the 21st century. If we don’t get this right, what a shame.”

Villaraigosa focused on statistics for Los Angeles, where 50 percent of all households have an immigrant, and 44 percent of all businesses are started by immigrants. He cited the LA Chamber of Commerce as reporting a 14-percent increase in family income when the head of a household becomes a citizen.

“It is not just for nostalgic reasons that I am passionate about this issue,” Villaraigosa said. “It’s because it goes to the heart of the economic future of our city, the social cohesion in our city.”

“We live in the greatest country in the world,” Schwarzenegger said. “When we’re at our best, when we work together and when we work without fear, nothing can stop us. That is why I know we will solve this issue. I know that this year we will have immigration reform.”

Barriers to voting have huge impact on turnout, but Americans overlook their effect

Practical difficulties such as child care requirements and limited polling place hours can curb voter turnout, but USC researchers find most Americans think voting is a matter of belief.

Conservative Supreme Court justices disagree about how to read the law

In a court with a 6-3 conservative majority, the more important divisions may be among the six Republican-appointed justices.